Ripples from the Dunes by Nancy Nabak, Communication Coordinator 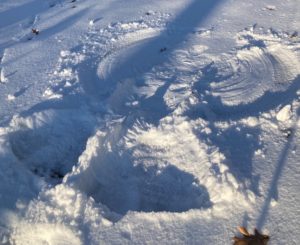 When the white stuff falls, I don’t  go south. Instead, I don my boots, snow pants, and coat and pride myself in being one of the first to make a snow angel on the block.  (Yep, even though I’m closer retirement than performing at a grade school Christmas program.)

Snow brings romance at a time of the year when it seems to be needed. The epic success of the classical movie “White Christmas” says it all. But there’s so much more to snow than singing about it on a train to Vermont.

Snow is critically important to our ecosystem. For one thing, as it relates to humans, our spring and summer water resources depend on the meltwater from snow. And then there’s the subnivium. The subnivium is a seasonal world beneath the snow’s surface (also known as nature’s igloo), that’s insulated and maintains a constant temperature.

The subnivium concept is intriguing to me so I’ve done a little more research and as it turns out, UW-Madison scientists, Jonathan Pauli and Ben Zuckerberg, are asking and studying the question: what happens if snow disappears in a warming climate?

Pauli and Zuckerberg believe that warmer winters will reduce the subnivium’s duration, depth and insulation. They tested their theory with a model based on what the Great Lakes will be like in 2050. According to an article in The Science Explorer, their results demonstrated the subnivium showed a larger temperature variation and decreased — not increased — temperatures, because without enough snow, temperatures fell due to this loss of insulation.

“In a warmer world with less snow, winter soils would be colder because the insulating snow layer on top is reduced,” said Henry Gholz, a program director in NSF’s Division of Environmental Biology.  “That has implications for farmers planting crops in spring, as well as for the many burrowing mammals, microbes and insects that overwinter in snow.” These changes will also have important impacts on species that need the subnivium to survive, Zuckerberg says, “and will lead to large-scale shifts in their ranges.”

Climate change is a big pill to swallow, and on the surface, a bit overwhelming. But if we believe collectively, we can do better for future generations of all life forms on earth, (we have already demonstrated this through human intervention and the come back of endangered plant and animal lives) we can create change. Click on this link to find some ideas through the National Oceanic and Atmospheric Administration:

This is the season of hope. The season of believing. Please find a way to do something in your corner of the world to help our earth and to ensure our neighbor’s children can enjoy the gift of making snow angels well into the future.