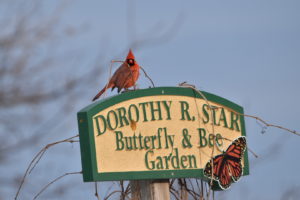 Each year for the past 120 years or so, people have ventured out across North America to count birds at Christmastime- between Dec. 15 and Jan 5.  They count in specific 15 mile diameter circles, one or more to a county on one particular day, record all the birds they find, and report results to the National Audubon Society.  In Manitowoc County, there are four such circles that have been counted each year for about the last 50 years.
I’ve participated in 30 years or so of such counts, either alone or with others.  I’m not able to do all four each year, but usually try to do the counts for Manitowoc and Two Rivers areas.  Others from Woodland Dunes’ staff also help with the Two Rivers count, which includes our nature preserve.  We were fortunate this year- the weather on both the Manitowoc and Two Rivers count days was cool, but not windy or snowy so conditions were good for birding.
We found a couple dozen species on each of the counts among our group.  The count at Woodland Dunes revealed a golden-crowned kinglet, a tiny little bird which somehow is able to stay warm in winter, traveling with chickadees and nuthatches in little flocks, one of the cutest birds ever.  Out in the grasslands it was a great day for hawks- kestrel, rough-legged, red-tailed, and northern harrier.  A lot of the remaining birds were close to the feeders, including a few American tree sparrows visiting from the far north for the winter.
In Manitowoc, my assigned area was in and around the City itself, so I concentrated on my home property and a number of city parks.  The usual sparrows, finches, and jays were present, along with a few less common birds like a Pileated woodpecker, bald eagles, an American robin, and a Yellow-shafted flicker.  One pond which receives warm water from a nearby industrial building had hundreds of mallards and Canada geese, plus a couple of less common black ducks.  Others who were out counting found a hermit thrush, cedar waxwings, and other wonderful visitors.
There were additional counts in the county, centered on Collins and Menchalville, which always yield interesting birds from their forests and extensive farm fields.
So what happens with all these observations?  As you can imagine, Audubon has a lot of data to analyze- millions more observations every year.  Such large amounts of data across large areas makes it possible to document changes in bird populations, although it doesn’t tell us why those changes are happening.  Some birds are increasing in our region, like red-tailed hawks, blue jays, nuthatches, cardinals, and others.  Some are declining, like red-winged blackbirds (in winter), and evening grosbeaks, which are seldom seen here anymore.  The complete table is on Audubon’s website at  https://www.audubon.org/conservation/where-have-all-birds-gone.  Its clearly important to keep counting birds so that we can be aware of their population status, so that we can make good decisions on their behalf.  The International Union for the Conservation of Nature, scientists who have assessed the populations of more than 150,000 species of plants and animals use data like this to determine how species of animals are faring.  At present, they estimate that more than 42,000 species are threatened with extinction, and more than 900 species which formerly lived are now extinct.

The Christmas Bird Count is a longstanding tool for tracking bird populations in winter.  It provides us with information we need to make decisions on how to manage the natural world.  Although nature precedes us, and its scope is enormous, we have a great impact upon it.  Now, for the sake of the birds and for our own sake, we need to make rational decisions and act on them.