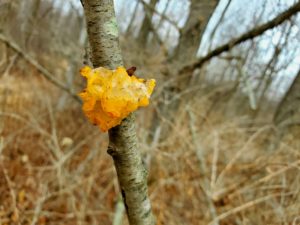 It always amazes me how many things a person can see on just a short walk through nature. On Monday, I walked just the first half of Willow Trail, and on this short 15 or so minute walk, I saw so many amazing things!

As I was admiring the bright color of the red-osier dogwoods alongside the trail, some movement near the ground alerted me to a cottontail rabbit searching for food underneath the cover of the dogwood. I stood there for a minute watching and listening to the crunch-crunch noises of it eating some plants until its ears perked up, and faster than I could even blink, off it ran into the safety of the shrub thicket.

Stepping onto the boardwalk, I noticed that a red fox was kind enough to poop right in the middle of the path. But it is fun to think about how they also use our boardwalk as a walking path. I’d like to imagine their paws making little thuds as they hit the deck boards as they race down the boardwalk searching for something to eat.

As the shrubs turned into a more forested area, I heard a hairy woodpecker call out from somewhere nearby. Sure enough, as I rounded the bend in the boardwalk I saw it pecking at a tall ash tree, calling out as it hopped around the trunk of the tree.

Also nearby, chickadees called from the treetops “chickadee-dee-dee”.

The boardwalk came to an end, and I hopped off onto the no-longer-frozen ground. The mud squished under my boots, making prints right next to some deer tracks. Like the fox, deer also commonly use our paths and leave a much nicer mark than the fox.

I reached the prairie and gazed over the area that used to be full of colorful wildflowers, now an orangey-brown grassy-looking area. Still beautiful.

A call from above had me looking up in time to see two mature bald eagles soaring together in a circle right above the prairie. Calling out to one another they flew for a minute or two before flying off in the direction of the river. It always makes me smile thinking of how these large and majestic birds make such a soft and non-threatening call noise.

I grabbed the sign that I went out there to get (I was working after all), and decided to take Goldenrod Loop back to the boardwalk to see what else I could find out there.

At the intersection of Willow Trail and Goldenrod Loop, an orange jelly fungus on a branch stood out against the grays and browns of the winter forest. I admired it for a minute, taking some photos to show anyone who cared to see a squishy brightly colored fungus later on.

Now on Goldenrod Loop, I was greeted with more muddy deer tracks, though I could see none of the animals that made said tracks around. Their fur camouflages them quite well, so I wouldn’t be surprised if they were nearby.

A mouse dangled from the crook of a tree alongside the trail, placed there over a week ago presumably by a Northern shrike. A meal long since forgotten about. Probably too high up for our fox friend to find for a quick snack.

Passing by the people-sized brush pile that we use for our school programs, I saw some rabbit tracks hop-hop-hopping over to it. Funny how the animals we talk about potentially using it for shelter actually do. I wonder if they think about what kind of creature made such a large brush pile?

Back on the boardwalk, more fox poop. Branches swayed in the wind above, while juncos hopped around the ground next to the boardwalk, chirping at one another excitedly. Reaching the end, a rabbit zoomed across the path before I got too close to its hiding spot. Maybe it was the same one as before, or perhaps its friend.

Passing by the sky shed, a red squirrel chattered from the nearby spruce trees, I am assuming it was shouting “add more bird seed to the feeders!” but who knows.

Back at the nature center, I see more people heading toward the trail. While I was out there I saw three different groups of people out for a walk. Even more people came as the day went on, I am assuming that a lot of people had off today for the New Year’s holiday. It was nice to see that on their day off they chose to spend it in nature. I hope they all got to see and hear some of the amazing things I did while they were out there.

Regardless of how short or long your walk is, there are always amazing things waiting to be seen out in nature. Come on out and see what you can find!