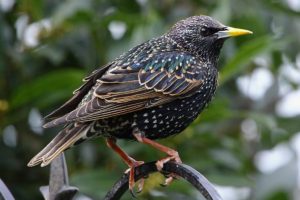 Each year at the nature center, one pair of European starlings makes a nest within the masonry wall of the milk-house attached to the barn. Over time, the walls have shifted, and there is an opening alongside the door frame which leads to the hollow interior.  The starlings raise at least two broods of young there and often perch atop the barn to survey the Nature Center’s goings on.  They call almost constantly, seeming to enjoy hearing themselves sing.  In the last year, one in particular is very noticeable- calling with an almost wolf-whistle, “Whew!”

Our staff first noticed the bird with this distinct song on our site, but gradually became aware of hearing the same song at the harbor in Two Rivers, and on the north side of town by the Pick N Save.  Clearly this bird gets around, and while we don’t know exactly what the local range of a starling is, this one seems to be comfortable anywhere in Two Rivers.

Starlings are cavity-nesting birds found throughout the US, southern Canada (where they are migratory), Europe, Western Asia (including parts of Russia and China), northern Africa, the Middle East, and parts of Australia and some Pacific islands.  They are very successful birds, able to adapt to a number of habitat types including structures made by people.  In fact, people brought them here- people who loved Shakespeare’s plays and wanted to introduce every bird he mentioned into Central Park.  This worked very well for starlings, which proceeded to nest and increase their numbers and expand across all 50 states.  In doing so; however, they out-competed native birds (such as bluebirds), learned that on farms they could find and consume tons of grain, and in a short period of time became a rather despised species as a result.

Still, you have to give them credit- they are bold and brash and quick to adapt.  Judging by their complicated songs they have an affinity for music. Many people, including Mozart, have kept them as caged birds just to hear them sing.  I have heard them imitate barking dogs, circular saws, flocks of geese- for no apparent reason.  This wolf-whistle bird, lets call him “Don Juan of Two Rivers” is a first for me.  It will be interesting to see how long it remains in town (starlings have been known to live for up to 22 years) and how many heads he causes to turn at the sound of his suggestive songs.