When the weather is mild, it’s nice to sleep with a window open just a crack.  Letting in some fresh, cool air seems like a healthy thing to do after being cooped up so much in the winter.  With that come some risks, especially if one is a light sleeper, because even in winter nature is busy at night. 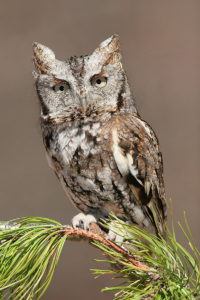 At our house,  there is always a background hum of human activity, I-43 is not far away and it seems the traffic is constant.  The same is true for Rapids Road.  Each night a train enters and later exits the city, blowing it’s horn at every intersection, it seems.   I typically hear the pleasant sound of the wind chimes that friends gave me when my dad passed away.  They remind me whether the night is calm or blustery.  During the latter, the sound of wind in the spruces at the edge of the yard is noticeable, and I’m thankful to have a warm home.

On one such night recently during our extended January thaw, I was happily asleep when at 3 am a blood-curdling, high pitched but descending shriek made me jump (even though it is a familiar sound). It was a screech owl- a small bird not much larger than the saw-whets we band in the fall.  On that night, the screech must have been in the spruces right near the house, judging by it’s volume.  After a few screeches it sang another song, a soft mellow trilling much more pleasant to the ear.  It continued calling in that way for quite a while, although probably not as long as it seems when one is awakened and trying to fall back asleep.  The screech is a year-round resident, and in warmer months when outside at dusk, we hear these birds almost every evening.  A neighbor told me that they have been nesting in wood duck houses he places along the river, and for the owl’s sake, I’m grateful that he does.

Of course, after being awakened by the screech owl, sleep does not come again immediately and it’s a while before I’m happily unconscious again.  Than, at about 4:30 am a series of deep, booming hoots erupt just outside- the local great-horned owls are back.  They are courting, and call back and forth to each other.  The male’s hoot is deeper, and the female’s higher pitched.  Perhaps they were attracted to the yard by the screech owl’s earlier calls, or perhaps by the rabbits that feed on the leavings of bird seed beneath the feeders. Great-horneds are opportunists and will eat anything smaller than they are.  Actually, sometimes, larger.  Opportunity aside, this night they are about pair bonding, calling back and forth before moving on to look for a meal elsewhere.

I’m glad they’re neighbors, just as I appreciate my fellow humans nearby.  The sound of the owls makes the place feel just a little wild and uncivilized, even if they cause me to lose another hour of sleep.

Owls aren’t the only midnight distractions – one night someone’s car alarm went off far away, causing the local pack of coyotes to feel obligated to sing along.  And on another night recently a red fox sang his “bark-bark” courtship song.  And in spring, if I’m especially lucky, I’ll hear the song of a whip-poor-will among the toad chorus, a song that used to keep my dad awake at night, but one that is now heard less and less frequently.  I’ll find out in a couple of months.

Removed from the distractions that might obscure them in daytime, the sounds of night are distinct and fascinating, even in winter.  And that’s a wonderful thing given we have so much of it this time of year.