I think naps are wasted on the young.  Not that children don’t need them- they definitely do, but with age sleep becomes more precious. A good night’s sleep, taken for granted when I was younger, is now something that is remarkable when it happens.  However, the positive side to sleepless nights is an awareness of creatures whose sleep patterns are different from ours.

During warmer months, I generally have a window open at night. In part because it seems easier to sleep well when it’s cool, but also because there are interesting sounds outside. Even in winter, with windows closed, the night sounds of nature can sometimes be heard.

Earlier in winter, great horned owls are courting. They are large birds, and it takes a long time to fledge their young, so they begin nesting in February. Even after nesting they continue to call, the males and females often calling back and forth to each other, unlike most other birds. They sometimes come right up to the yard, either at the nature center or at home, and I often wonder if their sound causes fear in the hearts of the neighborhood rabbits. When the great-horneds aren’t around, screech owls can be heard, whinnying or whistling in the middle of the night. During this cold snap, one decided that the water heater exhaust pipe at my brother’s house next door was a warm perch for the day. 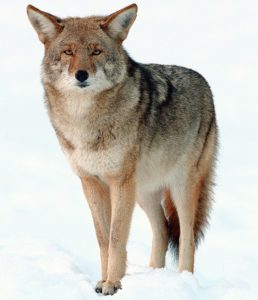 Valentine’s Day marks a season of romance for wild canines as well, and they sometimes make themselves heard at night.  At Woodland Dunes, there are coyotes which are starting to den now, in preparation for pups to come in the next couple of months. Foxes, too, are doing the same, although they are much more solitary.  I seldom hear a fox, but many nights at home the coyotes are singing. They usually start in response to  the signal from the train which travels into and out of Manitowoc each night. When they first hear that horn in the distance, they sing as if they were part of an old western movie- mournfully howling away, sometimes just a few yards from our house. Our dog never responds at all- I wonder what our tiny furball thinks of her wild cousins outside. Their chorus doesn’t last long- probably less than a minute, and then they are silent again.

Coyotes are, I think, more numerous than they were when I was young. Despite a continuous hunting season in Wisconsin, they have managed to grow their population, feeding on rodents and other small animals, and deer carcasses- even fruit during the appropriate season. Hearing them, and other animals in the night, reminds me of all the remarkable wildlife that we don’t often see, but live all around us. I look forward to the coming weeks when the songs of coyotes and owls are joined by those of frogs and different birds- it won’t be long now.