Ripples from the Dunes by Jessica Johnsrud, Education Coordinator.

Recently one afternoon, I was driving along a country road and noticed a large, chunky bird perched on a stop sign. No cars were behind me, so I slowed down and pulled over. Once I got a good look, I realized this was a very exciting nature encounter – it was a barred owl!

Though we may not see them often, barred owls are found through most of North America and live in woodlands and wooded wetlands and swamps with mature trees. They are one of the larger owls in our area standing at 20-24” tall and have a 3 ½ foot wingspan. They have a brown and gray body with dark barring on the upper chest and vertical streaks on the belly. The barred owl lacks ear tufts and has large, dark brown eyes which stand out from most other owls. 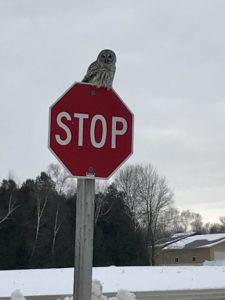 In February and March, barred owls are preparing for the nesting season. Like many animals, they have their own special courtship rituals, including bobbing and bowing heads, raising wings and calling to each other while closely perched. The males may also amp up the romance by feeding the female during courtship. The classic call of the barred owl is “who-cooks-for-you, who-cooks-for-you-all,” but they may be heard making barks, shrieks and “monkey” calls. A courting pair of barred owls can sure put on a concert!

Barred owls nest in cavities of old trees (snags) and often take up residency in the same cavity year-after-year. Some pairs will use old hawk, crow or squirrel nests and even nest boxes. The female will lay two or three eggs (though in some cases up to five) and they hatch 28-35 days later. The young are born helpless, with white fluffy feathers and closed eyes, but develop quickly and are able to take their first flight around 40 days after hatching.

Barred owls eat a variety of animals such as mice, voles, rabbits, squirrels, amphibians, fish, beetles and other invertebrates. They do most of their hunting right after sunset and during the night, but may also hunt during the day. I read that barred owls will even wade into shallow water to catch a fish or crayfish. As with other owls, barred owls will store food in cavities or in the crook of a branch when food is plentiful.

The barred owl I was observing kept glancing at the snowy ditch below, perhaps keeping an eye out for mice or other prey. After a couple of minutes, another vehicle slowed and then stopped to observe the owl.  A woman rolled down her window and explained her son had been on the bus and saw the owl on his way home from school. When he got home, he immediately asked his mom if she would drive him the short distance back to the bird. This made me smile in gratitude and appreciation that the young boy wanted to share his nature encounter with his mother.

Amazing brushes with nature can happen anytime and anywhere, and often they are unexpected.  Even a casual drive on a country road can result in an unforgettable memory, and appreciation for the life around us.