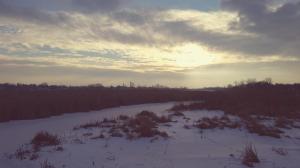 Our nature preserve was founded so that the special wildlife habitat between Manitowoc and Two Rivers, and the wildlife that resides there, might continue to exist. Over four decades, a lot of funds were raised, and much of the land within our goal area, centered around ancient beach ridges and wet swales was acquired so that it could be preserved.  That concept, preservation, is what drove the organization, along with providing opportunities for learning about nature using the preserve to do so.

Preservation was perhaps easier back then.  A lot of the land had been disturbed by logging or farming or other business, but once acquired through purchase or donation it could be allowed to rest, having provided food or fuel or sport or a place to explore for many people in the area.  Mink farms returned to the land, cattle no longer grazed the wildflowers or fertilized the swales, and the land healed itself.

Over time, things again changed, and some processes impacted the land beyond its capacity to manage itself, at least in the short term.  Invasive species is an obvious issue- people bringing in exotic diseases and pests from other parts of the world that kill dominant forest trees like chestnut and elm and now ash and change the whole character of ecosystems.  Or exotic plants and animals that out-compete native species because they have no predators here.  Our ecosystems evolved over long periods of time, and the changes we bring about happen very quickly, so there are long delays as nature adjusts.  Even things like creating farmland from forest, which creates fragmented habitats with lots of edges, makes a large difference to wildlife.  Edge species like deer now have an abundance of habitat, and we see lots of them not because we are driving them out of their homes, but because they are so well adapted to ours.

So preservation is difficult, or impossible, without management.  Preservation, by which I mean preservation of species, requires that we learn as much as we can about the land and how it changes and adapts over time, and what threatens the stability of our ecosystems.  In our preserve, we want to preserve as many native species as possible, and that requires management.  Management may involve removing invasive plants and replacing them with native ones, managing an overabundant deer herd through carefully regulated hunting, again so that native plants can survive their browsing, asking people to stay on trails and not let dogs run free so as not to disturb birds and other wildlife, excavating and restoring wetlands, or burning a planting of native grassland species.  Some of these might not at first seem as though they would benefit wildlife, but in the long run they do.  We don’t manage for the benefit of only a few species, but rather try to think of the ecosystem and its diversity overall.

We don’t know what future challenges will compound those our ecosystems already face.  Changing climate will probably be one, new invasive species and diseases- there are unlimited possibilities.  But we feel that for our land the best we can do is to try to promote a place that is diverse in native wildlife species that will help the land be resilient in the face of future unknowns.