Here we are, late in February and still in the dead of winter it seems.  By now we’ve become pretty good at adapting our behavior to deal with the cold- long underwear, warm boots, heated seats in our cars- humans are good at using their brains to deal with climate.  Wildlife have other means that take long periods to perfect- winter fur, more feathers,  sleep, migration, and many others.  Some animals also adapt their behaviors as we do, but perhaps spurred by a different process.  Some rodents store food in the fall which we assume they plan to find later on when needed.  Like us, birds have large brains in proportion to their overall body size, which researchers feel may be needed to process all the information involved in flight (imagine having to think in 3 dimensions all the time, and avoid hazards when traveling many times faster than we do on foot).  In the winter, some birds appear to use some of that brain capacity to better analyze their environment in terms of food, and remember where they stored it. 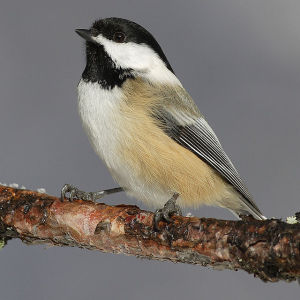 The birds that come in to our feeders are well adapted to surviving on their own.  Their species have all been on this Earth for a long time.  Besides that, the birds that visit us tend to be those that have experienced an increase in the habitat they prefer thanks to our logging and farming which fragmented the forests and created many forest edges.  Birds like the black-capped chickadee, a common but interesting species that is often overlooked in the search for rarer avian visitors.

I think of chickadees as the daring, feisty explorers of the bird world.  They seem to tirelessly probe their home territories looking for food, danger, and anything new.  They communicate with each other constantly, and seem to be able to quickly assess assets like bird feeders, and threats like hawks or cats, or people for that matter.  I seem to be considered less a threat to them all the time.  Most of us are familiar with the chickadee-dee-dee call they make.  Apparently this call is used if there is a perceived threat in the area.  One study found that the number of “dees” indicates the degree of threat, and that birds of other species know what the chickadee calls mean.   I usually only merit two or three dee dees.

There are three chickadee species in the eastern part of North America- the boreal chickadee, a brownish cousin that is rare in Wisconsin but more common in Canada, our black-capped chickadee, and the almost identical Carolina chickadee of the south.  It is easier for me to distinguish the latter two by their songs, which are quite different.  Wisconsin is, at least at this point, firmly seated at the heart of the black-caps range.

In winter, we find chickadees in groups of up to perhaps 15 birds more or less, but they are not necessarily family groups.  They are difficult to count due to their constant motion, preferring to pick a single sunflower seed from the feeder and fly to a perch on a branch to break the shell and devour the kernel inside.  And then another trip to the feeder, or to a tree branch or trunk to find camouflaged insects or spider eggs, or to a weedy patch to look for the waxworms that form goldenrod ball galls.  On cold days, a couple of hundred such forays are required to sustain their little metabolic furnaces that allow them to shiver endlessly for warmth in winter.

At night, chickadees will retreat to a very sheltered place, such as the tree hole cavities in which they also nest.  They conserve energy through the long night by staying out of the wind, fluffing their feathers, and falling into a deep sleep during which their body temperature actually drops a few degrees.  If they are lucky, they’ll wake in the morning to continue their busy lives.  Although most chickadees only live a year or two, the record is more than 12 years.

In the summer, chickadees are territorial, and during nesting season defend their territories and don’t form social groups.  If you feed during the summer, usually there are just a couple of chickadees at a time, and they almost go unnoticed among the grosbeaks, chipping sparrows, and other summer residents.

Warming climate appears to be allowing chickadees to move northward.  They don’t migrate, although young birds are known to move about irregularly.  The Carolina chickadee is moving to areas formerly occupied by black-caps in places like Indiana, and scientists have been able to document a zone of hybridization between the two species that is about 21 miles wide where their ranges meet.  I wonder if they eventually will replace our black-caps in Wisconsin.

Back to bird brains- chickadees have a fascinating ability.  Each year they physiologically reorganize their brains, allowing neurons with old information to die, and replacing them with new ones.  It seems as though they are thus able to discard outdated information about their world in order to increase their capacity to remember current, useful information.  There are times when I wish I could do that.  They also seem to be particularly interested in others of their own kind in distress- it is common from my experience to catch a chickadee during bird banding, only to have several more respond to its distress calls and be caught in the net themselves.  Is this a sign of empathy, curiosity, a way to confront danger, or all of the above?  We don’t know for sure, but we do know that there is still much we don’t know about even these common birds.