There are some birds that only the most ardent birders appreciate, like an early swamp sparrow, or a crow, or maybe a double-crested cormorant.  They are no less worthy than other birds, and each has its own remarkable qualities, but to many people they lack the charisma of those species that are more colorful, or sing a beautiful song, or are in some ways intriguing to us.  People are delighted when cardinals or indigo buntings visit their feeders, but dread grackles or other blackbirds consuming the food they put out.  It’s an interesting sort of stereotyping we seem to be prone to do. 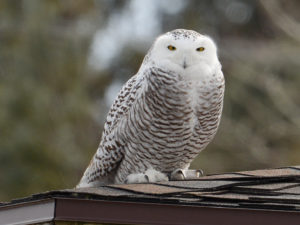 Although they aren’t colorful, owls seem to be intriguing to us- people are certainly interested in the little saw-whet owls that we band, and barn owls and others with particularly distinct features attract a lot of attention.  Even though they are common, great-horned owls are still interesting birds that are more often seen than heard.  Screech owls are my favorites, because they sing such an eerie un-owl like song and frequent the neighborhood where I live.  Some years, we see winter invasions by owls from the north, like northern hawk-owls, great gray owls, and of course snowy owls from the arctic.  This year the snowys showed up in exceptional numbers in our part of the State, and a couple have been seen all winter along the Lake.

The reason we see so many on certain years can be complicated.  Snowy owls prey on small rodents and hares in the north.  Their population is tied to the number of lemmings, a type of vole similar to our very common meadow vole.  When lemmings are at typical populations, snowy owls might produce 3-5 young when they nest on the tundra, but if the lemming population is high the owls might have 7-11 nestlings because food is plentiful.  Its a myth that lemmings commit suicide if their population is too high- predators take care of any surplus.  The owls, however, might find themselves in a difficult position if they produce so many young and the lemming population falls.  That means that the owls must move to places where there are more prey animals, sometimes migrating hundreds of miles or more to the south.  To places like Wisconsin, or even farther south, where meadow voles serve as a good lemming substitute.  Owls aren’t designed for long-distance flying, like some other birds, so by the time they reach us they might be in a very hungry state.  Also, they may encounter man-made hazards with which they are unfamiliar.  Traveling so far from home is not easy for them.  And when they arrive here they may be chased by people wanting to get those once-in-a-lifetime photos, which tires them even further.

This year there have been snowy owls seen both along the Lake and inland near large open areas.  They’ve been seen regularly at both Manitowoc and Two Rivers, and a number of people have called to say they’ve seen them nearby on Memorial and Mirro Drives.  I’ve never seen one within the limits of the Woodland Dunes preserve, although I found a reference that they had been seen here in the years between 1965 and 1978.  For three months we’ve waited, tantalized by the many reports all around us.

Then, finally, in the middle of the day, one day last week, Jess from our staff exclaimed “There’s a snowy on the pavilion!”  And sure enough, a young female stood on the roof next to our office, looking in at us.  A number of volunteers were there to help with invasive species work, and we all pulled out our phones and snapped photos.  One of them went to his home nearby and returned with his excellent camera and obtained the photos seen here.  The bird stayed on the roof for at least a half hour, dodging a pass by a Cooper’s hawk in the meantime.  When we went outside to work by the barn, the owl just moved over and away from us on the roof, watching our every move.  And then it was gone. 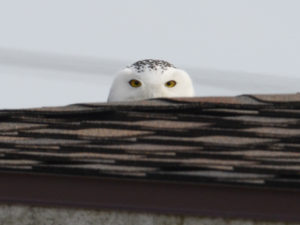 There have been hundreds of snowys seen in Wisconsin this winter, the most ever recorded.  They aren’t rare birds this year, but to us this one was special.  Its always our hope to provide a place where wildlife like this bird can find a home, or at least a safe place to rest.  In giving this to nature we and our visitors often find something special in turn, even if the encounter is for only a few minutes.  Our days are certainly the better for each one.