The weeks following Valnetine’s Day can be agonizing.  In a broad sense time moves along steadily and rapidly, but not quickly enough to satisfy those longing for spring.  A walk outside will confirm the coming change of seasons, which is just beginning to build like a tidal wave that in a month’s time will begin to wash over us once again. 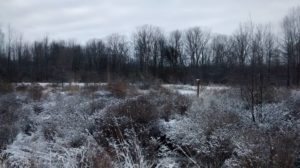 Here in eastern Wisconsin, the world sounds different than it did a month ago.  Chickadees, house finches, cardinals – all singing their courtship songs with greater regularity, even on cold days.  The sun’s effect is becoming much more intense, and even when it’s frigid, south facing snowbanks melt on sunny days.  The surface of the ground heaves as it freezes and thaws, helping to plant the seeds we scattered last fall.  Winter birds still linger- snowy owls are still around in greater numbers than usual, and the harbors give shelter to many goldeneyes.  A northern shrike visits the feeder looking for a smaller bird to pursue, and rough-legged hawks patrol the grasslands.  Pine siskins and redpolls still visit the feeders, but perhaps not as regularly, spending more time foraging elsewhere.

The foxes and coyotes are denning, preparing a home for their forthcoming pups.  Fox and gray squirrels are more active, spending less time in their nests.  A few horned larks are migrating north, showing up on road shoulders next to farm fields.  Great horned owls are already nesting, and bald eagles are thinking about it.  And as snow melts in the forest, weird skunk cabbage flowers and emerald pincushion mosses emerge.

A few “flying days” south of here, red-winged blackbirds are slowly pushing north – there are quite a few being reported from Chicago southward.  Some years, if many mild days prevail, they show up here in late February.  If the spring is cold, it might not be until mid-March.  The same is true for robins, grackles, song sparrows, and killdeer.  They seem to literally watch the weather and move when they feel they have a chance of surviving the last of winter a bit farther north.  Its a risky time of year for them.

Even farther south, where spring bulbs are beginning to emerge, tree swallows are becoming restless, as are ducks, cranes, herons, and others.  In the tropics, the beautiful warblers, orioles, tanagers, and hummingbirds which must avoid the real cold, will start to feel that way in a month or two.

And in Mexico, west of Mexico City where all the remaining monarch butterflies cluster on perhaps 6 acres of forest preserve, they too will give in to the urge to move north in a couple of weeks.  Unlike the others, theirs is a suicide mission on which their species depends.  Unlike seval other generations in the past year, these monarchs will have lived nine months or so, surviving off fat reserves and moving around occasionally to find water.  In March, they will decide its the right time to move, and leave the safety of their winter fir trees.  They will fly until they find newly growing milkweed plants, lay some eggs, and then die.  Theirs would seem to be such a tenuous existence, such a burden placed on a fragile little creature.  But perhaps, if a butterfly can do so much, we can find the strength to take better care of each other as we journey ourselves.  And take better care of the world around us so that all of our journeys can continue.