This community is full of potential.  To be sure, there is already much to be appreciated and enjoyed: outstanding natural attributes, wonderful people, and many effective businesses.  A solid groundwork has been laid, even though it is not always appreciated. 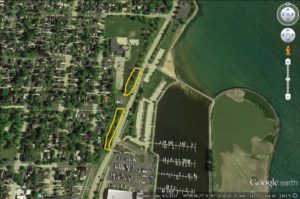 It seems that a new or perhaps re-energized vision for Manitowoc and Two Rivers is starting to emerge, along with a reinforced sense of cooperation in attaining it.  It is exciting to hear talk about a renewed appreciation for the natural aspects of our Lakeshore. The lakeshore is an important part of that vision, and the acknowledgement that nature contributes to our quality of life is gratifying.  And, perhaps most importantly, the emphasis that being inclusive and cooperative in our efforts will allow us to accomplish much more than being divisive.

There is a renewed interest in our lakefront and our parks, and how improving them will compliment efforts to improve our businesses.  Both cities have obtained funding to improve parks and other public natural spaces in the coming year, including enhancing other areas adjacent to them.  We, of course, encourage such efforts and are happy to help if and when we can.

One such project involves the Manitowoc lakefront near the harbor.  The City has been working to improve the beach at the Blue Rail trail by taking measures to improve water quality in that area, while at the same time supporting the project we and several partners are undertaking to improve the containment facility as wildlife habitat for migrating birds and butterflies.  So far, we’ve been mostly working on removing harmful invasive plants while beginning the process of planting native species, something that will continue this year.  The area is still a very rough work in progress, but the appearance will now start to improve as the native plants begin to take hold.  We will also be establishing a purple martin colony out there; installing several martin condominiums this spring to supplement the one that was installed last year as a trial.

A new project also emerged, involving the steep slope along Maritime Drive across from the marina.  The City has concerns about large trees, some of them invasive, non-native species, potentially toppling over, landing on the roadway and taking part of the hillside with them. This apparently happened a few decades ago.  City representatives asked if it were possible to replace those trees with other species that would benefit birds while not growing so large.  Of course, we were very happy to be asked, and to have the opportunity to partner on such a project.  So, as it turns out, we helped prepare a management plan for the hillside, and were able to obtain funding from the US Fish and Wildlife Service to purchase native shrubs.  As a result the City will have existing trees and non-native shrubs removed later this year, after which we, with the help of volunteers, will re-plant the slope with native species.  Although at first the area will be very much disturbed, over time it will regrow in a way that not only protects motorists, saves the City maintenance costs, but it provides a more natural area that benefits migrating birds and other wildlife.  Property owners won’t have to worry about trees taking out parts of the bluff, and they’ll still have habitat for birds adjacent to their yards.  It will be a rough start, but in the long run the area should be improved overall.

The hillside on Maritime Drive is an example of an unused and unbuildable area that can be improved as an oasis for wild birds.  We appreciate the City’s forethought and consideration for birds on this project, and also appreciate being asked to help.  We’ll certainly do what we can to help make this area another beautiful little piece of the Lakeshore.