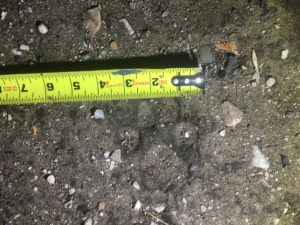 Recently, a neighbor of our preserve sent a photo of a footprint in the mud.  The print was about 3 1/2 by 4 inches in size, and showed no marks of claws.  It appears that the bobcat that was photographed at the north part of the preserve recently is also exploring the south part, not surprising because bobcats – especially males, have a range of many square miles.  A volunteer also sent trail cam photos of coyotes and foxes from the central part of the preserve, and a mink was found dead on the road in front of our main building.  A northern shrike has been seen hanging around our headquarters also, looking for mice and small birds on which to feed. There appear to be a wealth of animals that people often refer to as “predators” around Woodland Dunes.

There seem to be two mindsets on viewing  “predators.”  One is rather self-centered, that they are competitors that deplete resources we want for ourselves.  I remember being young and watching the men in our family shoot a red-tailed hawk that had been found in a large tree near our house.  In those days, it was considered the right thing to do because hawks and foxes (and the like) competed for rabbits and other small game that our family liked to hunt.  For many years there were bounties put up by government, paid for the killing of certain predators.  And of course their numbers declined.

The other way to view predators is from the standpoint of the ecology of the land.  Predators have evolved over time along with their prey, and they feed on other animals in order to survive.  They are more likely to catch the slower, weaker, and less clever prey animals first.  In doing that they are likely to remove animals that are ill from the population, and improve it’s overall health.  Also, the role in controlling the populations of other animals can have significant positive effects on ecosystems.  Aldo Leopold wrote of his realization of this as a young man in his essay “Thinking Like a Mountain.”  Leopold was ahead of his time, and it’s a shame he didn’t live to see some of the remarkable transformations that are happening in places like Yellowstone, where predators were reintroduced.

At Woodland Dunes, native predators are considered a necessary part of our ecosystem.  We know that they’ve evolved alongside other animals that have lived here over millions of years. This interaction is usually beneficial to the whole, often in ways that we are only beginning to understand.  Predators are not evil, they fulfill a role in nature. When we think of predators we tend to focus on animals that are large and scary, but in truth almost every animal- mice, songbirds, squirrels, ladybugs, and deer included- at some point eat other animals.  It has always been that way, and we need to allow it.  In fact, we need to allow as many parts of our ecosystems, plants, predators, and prey to continue to exist for our own good.  While we might think that removing animals that compete with us is a good thing, in the long run I’m pretty sure that would actually turn out to be just the opposite.

So, at least in our preserves, the predators, as long as they are native to our ecosystem, are welcome and will be a source of study and wonder just like any other component of nature.