With the exception of those who enjoy skiing, sledding, and snowshoeing, I’m guessing than most of us are enjoying the unseasonably mild weather this winter.  Ice fishermen may soon join the ranks of disappointed.  I was talking to a conservation biologist the other day, and he mentioned that in over 3,000 February days for which we have temperature data, there were only 21 that had high temperatures over 50 degrees.  That would be 7/10ths of 1 percent.

So how does weather like this affect wildlife?  Certainly, the effects can be profound, both good and bad depending on the species. For our winter resident birds, things are probably looking pretty good.  They’ve had to spend less calories just to keep warm so they are probably under less pressure to find food.  If songs are any indication of happiness, they must be in great moods as chickadees, cardinals, nuthatches, house finches, and woodpeckers are all singing and drumming away as if it were April.  Great horned owls and bald eagles are nesting and may have eggs to incubate already.  Horned larks are showing up on country roadsides, and they too, probably have an easy time finding food on the almost bare ground now, as do turkeys.  I wouldn’t be surprised if red-winged blackbirds and more robins start showing up soon. Our abundant deer are probably not under a lot of stress either, a combination of warm temps and little snow makes life easier for them too, and there may be a lot of fawns come spring.

The warm weather can have a downside for some as well.  Winter isn’t over, and some migrants might be tempted to move north before it’s really safe to do so.  I remember not too many years ago many killdeer migrated north in February, only to be killed by a subsequent snowstorm.  The prolonged freezing and thawing of the soil can damage plant roots – farmers certainly know this, but I’m sure native plants are affected as well.  Lack of really cold temperatures also allows plant diseases found farther south to survive here as well, causing unexpected problems.  And although it’s hard to think about, real cold probably hastens a merciful end to the lives of some diseased wildlife, preventing the spread of pathogens to others. 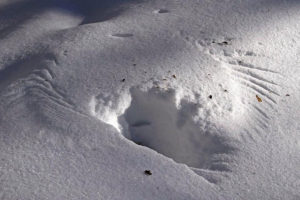 Snow, or the lack of it, probably affects a lot of mammals in significant ways.  Snowshoe hares in winter coats stick out like a sore thumb against brown, bare earth and are much more vulnerable as prey, the same for weasels.  Voles, which are comfortably active beneath the snow, must find other shelter during a melt lest they become a meal for raptors surveying the open landscape…

Some animals which don’t really hibernate, like squirrels, skunks, and raccoons are more active during warm weather, but I don’t know if that’s a problem for them.  I do wonder about the animals that sleep more deeply, like chipmunks and especially ground squirrels and woodchucks.  The latter typically emerge from their burrows in March or April and appear very thin.  If they emerge too early, they may have a hard time finding anything growing, and a meal might be scarce. The same might happen if winter is longer and colder than normal, so I think their lives can be hard ones.  Except maybe for the chipmunks, because they store a lot of food underground for midwinter snacking purposes.

Watching the change of seasons is endlessly fascinating.  Trying to predict the effects of unusual seasons like this one, is difficult, but at the same time stimulates the imagination and leads to further study.  For an imaginative and much more eloquent writing about the milder side of winter, treat yourself to the essay “January Thaw” from A Sand County Almanac by Aldo Leopold.

photo- mark in the snow left by a hawk or owl attempting to catch a rodent, from US Fish and Wildlife Service.