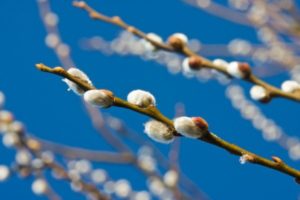 The higher than normal temperatures we’ve experienced in the last week have advanced our season significantly.  Even if we go back to more normal temperatures now, we’ll still be at the end of winter with normal high temperatures near freezing.  As suspected, animals and plants are responding to their warm surroundings.  Weeks early the ice has gone out on the river in my neighborhood, and redwings, grackles, cowbirds, bluebirds, killdeer, and cranes have all returned.  Buds are swelling, skunk cabbages are emerging, and the onset of spring is temporarily in high gear.

On our Black Cherry and Cattail trail, a pussy willow is budding.  The little snow cover we had insulating those seeds and sleeping plants is melting.  Birds are singing their mating calls. This morning a robin was heard in full song.  Maple sap is running- it will be an unusual year for syrup production around here.

Some spring processes may start then stop if the weather turns cold again. This isn’t the first time this has happened and nature overall has the capacity to adapt.    That sounds benign, but imagine being a red bat which hibernates in the forest at the base of a tree rather than in a cozy cave.  Red bats become active when temperatures reach the 50’s, and they’ve been observed flying already this year.  From the bat’s point of view, after surviving the winter, finding food is critical.  Are there enough insects on the wing yet?  I haven’t seen many.  Perhaps that’s why the red bat I found was dead – beneath lights that in the summer would attract insects.  As nature adapts and ecosystems are reorganized, some species will prosper and others will decline.

Overall, there has been less snow cover on the ground even though our snowfall has been close to normal, with more rain and freezing rain than normal. The ground also took longer to freeze this year.  Here at Woodland Dunes, we took advantage of the seasonably warm fall to spread many acres of wildflower and grass seeds.  This is called dormant seeding and allows the seeds to go through a cold stratification as if they naturally dropped from plants. Many native seeds require this cold period before they germinate- if you plant in spring, some of the seeds will stay dormant until they can chill out for an adequate time. Last fall, we were unable to conduct a controlled burn in preparation for wildflower seeding due to wetness and the field staying green right up to snowfall. Green vegetation won’t burn.

On the flip side, with the warmer winter we have been able to continue working on invasive species control throughout the winter. We may also be able to conduct a spring burn in March and seed those remaining fields.  It will be interesting to see how the change of seasons progresses.  It is not always the tidy, gradual change we think of but rather a series of starts and stops as nature plays out complex interactions.  Just like the animals in our ecosystems, we have to adapt too.

Weather patterns such as this year and last remind us that the seasonal activity of plants and animals is not only linked to length of daylight but also to temperature change cues.  While we observe the trends in weather patterns and temperatures throughout our lifetimes, we would be wise to also compare them to a bigger picture of long term data and assess what is an anomaly and what may be part of a larger natural cycle.  Guessing, or what we like to selfishly call “common sense,” won’t really help us understand.  In the meantime, we will practice adaptive management, planning our restoration activities around the ever-changing conditions, and hopefully restoring those habitats to where they are able to adapt as well.