There is a lot of “buzz” about pollinators again lately and they certainly deserve some attention.  Last week, the rusty-patched bumblebee became the first species of its kind to be officially listed as endangered.  Cheerios is giving away free wildflower seeds for planting to help bees.  Monarch butterflies are leaving Mexico to begin their awesome and perilous journey northward, to begin laying eggs as milkweeds emerge in spring. 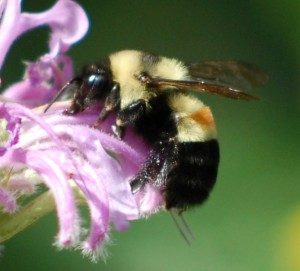 Pollinators are animals which help plants reproduce by physically transferring pollen between the reproductive organs of plants. Pollinators include many insects, but also mammals like bats and others such as hummingbirds.  We often think of honeybees because they are our insect livestock, the only one I can think of offhand save maybe silkworms.  People developed a relationship with honeybees overseas and brought the insects here to produce honey and help pollinate crops.  People enjoy keeping bees as a hobby and the economic value associated with their effort and honey.  I’m afraid that we vastly overlook the contributions of pollinators: the many species of native bees, flies, butterflies and others which pollinate and go unnoticed by people.  Many pollinators are small, non-aggressive or bothersome, and live completely outside of our awareness.

The rusty-patched bumblebee is an insect that used to be found here, literally in our own backyards, and were quite common in their range 30 years ago. It pollinates 65 species of plants, including some that produce food for us. Scientists think that they are declining because people have brought diseases and parasites from Europe which affect these bees. We also use pesticides such as neonicotinoids to which bees are especially vulnerable, and much of its native habitat and plant life has been lost.  The fact that it’s now endangered and no longer here, is amazing and concerning.

Insects as a group are highly successful and have been on Earth a lot longer than people.  They have adapted to incredible changes over immense spans of time.  Considering an insect species should decline during the short span of our lives to the point of becoming endangered, should give us cause to think.  And do something.

Last year, Woodland Dunes established plantings of native wildflowers on about 80 acres of land, specifically planting wildflowers that help pollinating insects. This was done with various partners including: USDA Natural Resource Conservation Service, US Fish and Wildlife Service, Pheasants Forever (these plantings help pheasants), and others.  This spring we will work on an additional 50 acres of our property.  We’re also working on similar projects along the Lake Michigan shoreline where butterflies migrate.  Establishing habitat on the containment at Manitowoc Harbor is another priority, with the approval of both cities of Two Rivers and Manitowoc.  Even small patches of wildflowers can help pollinators, birds, and other animals – the more patches the better.

Perhaps there is still time to help animals like the rusty-patched bumblebee.  There certainly doesn’t appear to be any harm in trying.

photo is a rusty-patched bumblebee by Joanna James-Heinz, Xerces Society.