I’d like to take this opportunity to thank the City of Manitowoc for having planted flowering crabapple trees on the median strip of Waldo Boulevard near the Little Manitowoc River years ago.  I usually drive that street on my way to and from work, and almost every morning this winter I have seen robins picking at the shriveled fruit.  When I was young, a robin in winter was a rare thing.  Ten years ago they were uncommon but regularly seen in the winter.  This winter, many of them are around. I’m pretty sure it’s because both the winter has been unusually warm, and because a lot of people like to plant crabapples and other flowering trees that produce fruit. In some cases, the birds don’t like the fruit initially in the fall, but freezing over winter apparently sweetens it, making it more tasty.

Robins are common birds here and I think they represent an example of the kind of ecological reorganization that’s happening around us.  We’re forcing changes on the natural world to the good of some species and the detriment of others.  Robins are obviously one species that is very capable of adapting to change.

I remember looking at a bird book my mom had when I was very young, a book of photographs.  One featured a robin in the northwoods and described it as a shy species of deep forest, unlike it’s city-dwelling cousins.  Indeed, in places like the Boundary Waters there are robins, but they act like the other thrushes in the thick bush – gleaning fruit and insects, and nesting in dense foliage.  The edge of the forest on lakeshores is always a good place to see them.  They are much more scattered than city-dwelling robins across the landscape. 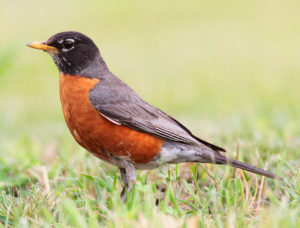 Imagine those as the original robin stock of North America, very successful in their forest habitat, then Europeans came.  No big deal at first, but then, even with relatively primitive equipment, they harvested timber from immense areas of forest- clearing the land which became farms and leaving only fragments of forest.  That forest had lots of edge habitat, where the farmland and forest met – a lot like those lakeshore edges. Robins had little problem adapting to that change, even though it was a tremendous alteration of the land.

The Europeans brought something else with them- earthworms.  Our native earthworms were wiped out by continental glaciers- they’ve been gone for many thousands of years.  Europeans brought worms with their eggs in plant materials where they multiplied successfully and established themselves, aided by lack of native competition.  Wagon wheels moved their eggs from one place to another, as did tractor wheels later. Fishermen used them for bait, and dumped unused worms where they fished.  Robins, resourceful and ever-aware of food sources in their habitats, apparently found them to be a wonderful meal.

Then, the landscape changed further as  folks multiplied and urbanized parts of the land.  We liked things neat and tidy, and fell in love with lawns.  Earthworms did too, and the nice short grass made worms easy to get at.  Robins, which for generations foraged among a tangle of shrubs and the leaf-covered forest floor, took to lawns and the food items within and beneath the grass, again adapting to a new world.  We planted non-native trees and shrubs, and the robins found a way to nest in them.  Even buildings with their shelves and light fixtures were found to be workable to these birds.

Now, perhaps we’re changing the climate and many robins don’t need to migrate – or at least not as far as they used to.  Already here in March, they’re singing their full courtship songs and sound like they’re ready to start the nesting season.  Beneath the lingering snow the ground is mostly thawed and food is waiting for them, along with our crabapples.  It is no wonder that robins are common birds given their amazing ability to adapt and the favors we’ve done for them. This isn’t the case though for birds that depend on a colder climate or less disturbance- those species are the big losers in the world today.  The robins are doing great, but as for snowy owls, I don’t know what will happen.

As I write, several robins are outside, one singing, more chasing each other, mostly males.  They are completely ignoring the cranberries I put out for them- I’ll try raisins next.  Sure they’re common, but I admire their ability to cope with change, and their song is part of the score that compliments the beauty of a sunny spring day.