Earlier this week we saw below zero temperatures and the world was crispy. Now we’re above freezing and the world is soggy.  March has something for everyone and something new almost every day in the world of nature.

Now begins the magical time of year when maple trees pump their sweet sap upward and people harvest it – as they have for thousands of years around here.  Few trees have the ability to do that, or sap that has a high enough sugar content to make such harvest worthwhile, and we’re lucky to be able to take part in this activity. Maple sugaring affords an excuse to get out to the woods at a time of year when not a lot of other activity is taking place for people. And, it is an exercise in patience, giving one time to contemplate basic physics and world issues in general, as the forest slowly awakens back to life. 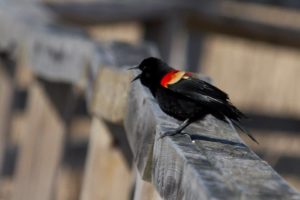 At the nature center, school children come out and learn about syruping, and also about the early spring ecology of the forest. They hike, looking for distinctive signs of life – the tracks and trees, lichens and mosses, that sometimes go unnoticed during the warm months. Where the surface of the snow a week ago was peppered only with seeds and plant debris, now skinny little orb-weaver spiders crawl across the surface seeking what I assume are greener pastures or thickets. A caterpillar does the same. How do these tiny cold-blooded animals function in the cold and snow?  Now that the world has softened up, foxes dig for their prey.

And at the bird feeders, the ultimate sign of spring has returned.  Several red-winged blackbirds visit to taste both sunflower and suet, then occasionally fly out to the marsh and sing. For me, theirs is the most welcome of bird songs in spring. They are followed in a day by song sparrows and a grackle, but those don’t seem to have the same psychological impact. Redwings don’t migrate too far – a few spend the winter around here, and most are found from Illinois southward, so they are poised to return as soon as conditions permit. The males come first, and females several weeks later.  They are one of the most numerous birds in North America, about 150 million of them. They are very adaptable, but like habitat with or near water consisting of thick vegetation. Males establish territories and try to gather a number- often up to 15- females into their harem which the males spend the rest of summer defending. Their lives are a bit like soap operas – males trying to keep their harems together, while females enjoying the company of other males if the opportunity arises. The marsh is a bit of a sordid place and it’s not easy to follow a particular genetic bloodline. How boring is our perspective – all we see are males perched singing on the tops of cattails and shrubs in the marsh, while females dive down into the vegetation. They give us little indication of the drama in their lives.

Unfortunately, the population of this very common bird is declining.  For all their adaptability, their numbers are slowly falling. Why? Researchers aren’t sure, but the population of insects, a food source for them, is declining everywhere, and habitat is still being lost.  Its that way for many living things and for our own sake we need pay attention to that.

But for now, the floodgates have again opened, and wildlife streams north as well as up from beneath the snow.  Every day there will be new things to see in and around our beloved Lakeshore- one need never be bored around here.