It’s funny how we struggle against nature sometimes: winter weather, summer heat, time itself (I am not a fan of daylight savings).  Then again, after another week of struggling to stay warm how do we not develop a bit of adversarial posture? During a recent walk on Willow Trail I found myself clenched against the cold despite my down jacket and space-age material hat and gloves.  Even though the wind was light and the early morning was sunny, it was just cold.  Obviously I should have been working harder to generate more of my own heat. 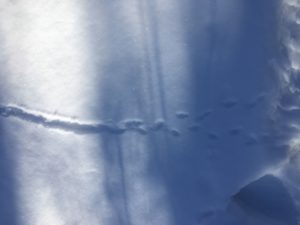 Around me, I was being taunted by tiny creatures weighing only a few grams who were much more at home than I was.  As is usual lately, chickadees and cardinals were singing away, and for the first time this year I heard juncos twittering away, practicing the songs they would eventually use to lure a mate up north where they nest.  The songs of cardinals, along with juncos and nuthatches, seem to be a chorus of laughter, obviously not a reflection of my aversion to the cold.  They know the sun is brighter and days longer, and spring is already here.  And they are not ashamed to sing about it.

That we live in a region where the seasonal change is dramatic is really interesting.  As the year goes by parts of nature are alternately covered and uncovered, and it helps to focus our attention.  During these cold spells, tracks have been preserved in snow for extended periods and each morning the stories that are written there are added to.  Willow Trail is brushy and excellent cover for a lot of animals.  Birds peck at fallen fruit; deer and rabbits travel back and forth among the dogwoods.  Mice and foxes are on the lookout for each other, while preparing this year’s dens and nests for this year’s litters.  No raccoons or opossums this time, although the musky scent of a fox almost smells skunk-like as they mark their territories.  And among them other tracks that cause one to stop and think- little pairs of tracks with belly rubs left by weasels and such.

I realize that even though I’m braced for unpleasant temperatures, I’m going to miss these winter stories.  Soon the snow will change and will no longer reveal the nighttime goings on so clearly and I’ll be left to wonder about them.  Of course these wonders will be replaced by new ones- flowing sap and singing frogs and dancing woodcock and everything that comes after them.  And those will be replaced by the sights and sounds of subsequent seasons.

It takes something special to appreciate the late stages of winter, but there is so much good to experience.  Before we know it, we will be experiencing, and appreciating, the next phase of the year in nature.