All too often we are confined to our workspaces, eyes fixed on computer monitors until we can hardly see anything else.  And when we’re not, we’ve got our eyes glued to phone screens subjecting ourselves to depressing news and meaningless gossip.  Boy, it sounds like I got up on the wrong side of the bed this morning! 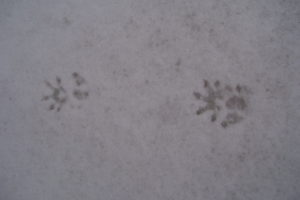 Opossum track in the snow

One would think that those who work at a nature center live a more organic sort of life, but in truth we are just as dependent on our internet connections as anyone else, especially this time of year.  But I think we also suffer cabin fever to a greater extent because the urge to get outside is sometimes irresistible.  Such was the case this week, when on a couple of sunny days we had occasion to prepare our field station for the coming maple syrup run and the school groups that will visit then.  We were smart enough to prepare before the snow was on the ground, and not too much needed to be done – save some final preparations to an evaporator donated by Gary Drohman and the shack that surrounds it built by volunteers, and the periodic filling of a special bird feeder placed to entice chickadees near to visiting children.

And as long as we were out, a trail camera was placed near another bird feeder at the head of Yellow Birch Trail in hopes of snapping a photo of a flying squirrel- a mammal we haven’t recorded at Woodland Dunes yet.  Beneath the feeder there were many tracks – deer, raccoon, and a squirrel, probably a red.  Lots of chickadees inspected us along with both white and red-breasted nuthatches, and a red-bellied woodpecker.  One didn’t realize at first, but there were birds all around, and if we took just a moment in silence to appreciate all the life around us in that cold woods, how much more we could see.  Those little birds didn’t need our attention- they were curious but at the same time sort of oblivious to our presence, although I’m sure they were more than aware of us. I think as some sort of benign part of the background that bears watching just in case.

Against the beautiful backdrop of hemlock, yellow birch, and red maple trees, with both young pine trees and clubmosses carpeting the ground in the bright sunshine and with little wind, Yellow Birch trail was a wonderful place to be at that moment.  From the onset it shows off the pronounced difference between the tops of the ancient dry beach ridges, and the adjacent wet swales, both formed by Lake Michigan as its waters fell over thousands of years.  Yellow Birch is a boardwalk- not because it entirely traverses wet ground, but more to protect the vegetation beneath and is located at the east end of East Goodwin Road.  It’s an easy walk, although the trail itself requires constant maintenance.  If you visit during the summer, you’ll see the same trees leafed out, along with an understory of starflower, and Clintonia lily, and probably be serenaded by a northern water thrush.  It a magical place no matter the season.

For now, it’s a relatively quiet place, populated with curious chickadees.  Its not a surprise that this was the first trail at Woodland Dunes, begun nearly 45 years ago.  No surprise because it’s been a beautiful place for thousands of years.

photo- opossum track in the snow