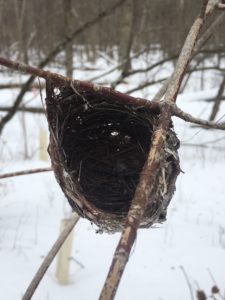 I’m sure many of us are happy to have February behind us with its abundant cold, snow and ice.  It’s hard to remember the mild, rainy first half of the season. It seems like we’ve had an entire winter in the last five weeks!  Have you noticed, though, that we’re finally hardening up to winter?  At least to me, cold days don’t seem quite so cold as they did early in February, and the sunny days are much brighter than a few weeks ago.  And, too, there are now longer days both in morning and evening.  In a few more weeks, the maple sap will run and snow will be melting as the sun imparts a greater share of it’s radiation upon us.

Now that we are more used to cold, it’s an excellent time to go to the forest.  The strong winds we experienced earlier deposited so many interesting things on the surface of the snow, which along with tracks and other treasures revealed in the leafless woods make for walks which are filled with the unusual. Plus, wooded trails lack at least some of the ice present out in the open and make for safer walking or snowshoeing.

I admit to being reluctant to go out much during the worst of our February weather, but last last week our Education Coordinator, Jessica, and I had the good fortune to be able to do some outside work which included checking Black Cherry Trail off the end of East Goodwin Road at the south part of Woodland Dunes.  In a few weeks school children will be using the trail and we need to check for fallen or falling trees.  We didn’t find any of those but there were, as usual, so many interesting things to see. 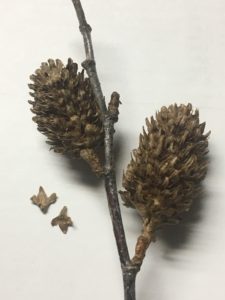 Recent winds caused the snow to be sprinkled with items from the tree tops, mingled with tracks of grounded animals.  We started by following the track of mink bounding along the top of the ridge, criss-crossed with tracks of red squirrels.  A turkey had emerged from a wet area and crossed the ridge, not needing to follow the trail, and several deer let their presence be known.  Above us, several woodpeckers worked at diseased trees in the swamp.  Just above the trail, at a height of 6 or 7 feet, was a beautiful cup-shaped nest made of woven strips of bark and lined with white pine needles.  The nest was only a couple of inches across, hanging from two small branches arranged at right angles to one another.  Fortunately one can now snap a photo with a cellphone to be examined more thoroughly back in the office, and also compare to birds heard singing near the trail during our summer surveys.  The result was that this appeared to be the summer home of a red-eyed vireo, one of the most common but also least seen birds in the forest.  That doesn’t mean they aren’t heard, because they sing almost constantly as they forage for insects high up in the trees.  They are tiny but loud, and live in forests across our continent.  That this one built it’s nest so close to the ground was interesting, and we imagine both parents and their young enjoying the warmth of Central America right now.

As if to mimic the real birds, among the needles and twigs on the ground were little bracts (modified leaves) which looked like bird effigies or fleur de lis- remnants of the flowers of yellow birch trees.  Nearby, though, there were some large trees whose bark didn’t quite look like yellow birch, and whose branches were adorned with spiny catkins- I had not paid much attention to them before but now they really stood out on both the trees and the surface of the snow.  Sure enough, they also belonged to yellow birch, and in teasing them apart they revealed both round and bird-shaped bracts that we saw on the snow as well.

As we crossed the bridges and headed north to Yellow Birch trail we found coyote tracks in the swamp, and thought about how much easier it must be for them and other animals to make their way through the swamp in winter.  Although they were all browsed within 6 feet of the ground, the white cedars still provided chickadee cover in spite of the deer damage and looked lovely in the woods in contrast to the snow.  As we approached a larger ridge, hemlocks and beech became part of the forest population.  Then suddenly we were out on the icy road again, thankful for the hour we had to spend in a wonderful forest, tucked away within the community we call home.