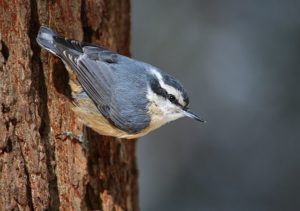 I am well on my way to becoming an “old timer,” although I’ve only been called that once by a student when I was visiting my daughter at UW-Madison. Once, so far, anyway.  That’s not a label that causes any discomfort for me at this point. There are many advantages to having survived many Wisconsin winters.  Mostly, one gets used to patterns of snow and cold and many of the mishaps associated with them.The fact that one lives through those gives perspective and heads off unnecessary drama. Yes, it gets cold but in a few weeks it will be better.  Yes, one gets stuck in the snow, but with patience one can usually get unstuck without too much embarrassment.
Looking for the upside is not all fluff and rainbows.  The best of life is real and is all around us, and to be content and effective one need not try to be joyously happy as much as aware.  Examples of this abound in nature, and right now, even though the weather has been especially challenging lately, there are a lot of signs of good things to come.
This year’s January was very quiet, even though the weather wasn’t that bad – except in terms of rain.  Birds are the most obvious wildlife we see, and they pretty much went about their business, except for bald eagles which visited in good numbers.  A lot of geese and ducks hung around, and bird feeders were busy with the usual suspects. This changed in February when real cold visited along with alternating days of snow and ice. A lot of the geese and ducks left for lack of open water, and the shore of Lake Michigan froze for the first time in years.  One would think this would present a sad situation for birds and indeed, some couldn’t take the extreme cold.  For others, the signs of spring were beginning, probably mostly triggered by lengthening days.  During the coldest weather some began to sing their courtship songs – chickadees, nuthatches, cardinals, and house finches.  On days when temps were in the 20’s it really sounded like spring outside. It’s still cold for them and life is still tough right now, but they seem to have the ability to anticipate better times to come.  My favorite are the tiny red-breasted nuthatches, which weigh just a few grams but tirelessly search the tree trunks for whatever dormant insect or egg mass they can find, alternating with trips to the feeders for sunflower seeds.  How such a small bird can retain enough warmth to survive January and February is amazing to me, and I can’t help but think that if they can survive the winter, what should we  complain about?
On warm days, the robins make themselves known, along with flickers and sapsuckers and redwings. They all seem to find protected spots during real cold but then emerge on milder days.  They are there, ready to take their place with the other singers when spring comes.  And down in the mid-south, sandhill cranes and others are already gathering to start their journey north. In a month real spring will have already begun.

We can hang on at least that long, right?