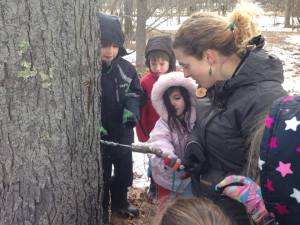 Despite the anxious times in which we live, full of disagreement and conflict, I have good news.  Many of the world’s problems will be solved in the next couple of weeks.  A series of deep, heartfelt discussions on every imaginable topic are now commencing by some of our greatest thinkers, who retreat to the forest to absorb it’s wisdom and slowly and carefully distill from the land perhaps our most precious spring elixir.  And, no, it’s not moonshine I’m talking about, although fermented beverages are sometimes involved.  Moonshine is pale and vulgar in comparison to its northern counterpart.  It’s maple syrup time.

Hunters and fisherman talk about their outdoor heritage, and how that is passed down through time.  Maple sap and the products it yielded were as important to early people, and maple trees held a special place in their lives.  One Ojibway legend tells of a starving man at the end of a long winter, who prayed to the Creator to save him.  Misaabe, a large hairy figure appeared, drew out a knife and cut his leg, which began to bleed.  He then turned into a large maple tree, and the hungry man drank the sweet sap flowing from what was now a trunk, and it saved his life.  Native people learned to make wooden spouts or spiles which were inserted into the trees in spring, and collected the sap in birch bark or wooden containers.  They added hot stones to heat the liquid and evaporate the water, leaving sweet syrup behind which they continued to process to make maple sugar.  A family might be able to harvest several hundred pounds of maple sugar in the spring to add to their food stores, probably critical to their survival.  There was reportedly a native sugarbush near Shoto, just upstream from our preserve along the West Twin, and it’s interesting to think about the people who lived here before us as they traveled to their spring encampments and began the process of harvest that had already been going on for thousands of years.

That process was observed and adopted by European settlers, and of course has been modified over the years.  Plastic tubing, bags, or pails now replace the birch bark containers, and special evaporating pans or even reverse-osmosis devices now separate water from sugar in ever more efficient ways.  Even so, there are still fundamental truths that remain unchanged. Although I understand that in maple trees, the alternate freezing and thawing temperatures of March help the xylem cells just below the tree bark to pump sap rapidly from the roots up into the tree, the process to me is still magical.  As is the fact that we are tasting the sweet sunshine of last summer and fall which the trees made into sugar and stored in their roots over the winter.  We can’t harvest too much, because the trees need that sugar too, to produce the little solar collectors on their branches that make all this possible.  We’re very lucky that they can produce more than they need and have some to share.  In a way they’re like cows of the forest, although the comparison seems to lack the dignity due the maples.

Many of us, including my friend Dan and myself, dabble in maple syrup so to speak.  We tap a few dozen trees, harvest a couple of hundred gallons of sap, and process it in an evaporator made of a stainless steel meat pan and cinder blocks fired by wood.  The sap is finished on a gas-fired turkey cooker, and the few gallons we produce is enough to supply our families.  At a time of year too muddy to do much else outside, it’s a pleasant way to pass some time while giving the appearance of being productive.

Now, school children are visiting nature centers all over the North, including ours, to learn about the heritage of maple harvest in this region.  It is good, and important, to take them into the forest and discuss its life, how we are a part of that, and how the land sustains us.  Too bad they miss out on the earnest conversations that are held around the fire as the sap steams- conversations that have continued for hundreds of generations.  Rest assured that the salvation of the world will be worked out around those fires as the sap slowly boils, even if there are only the trees around to hear them.