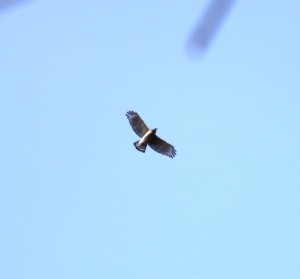 There have been some large waves of birds migrating north lately, especially last Wednesday night.  Thursday morning brought new songs to the yard – more and more robins, phoebes, yellow-bellied sapsuckers, golden-crowned kinglets, flocks of flickers, all joining the swans and other birds that have been moving through lately.

Two of our staff had the opportunity to visit the interior of the preserve last week on a quiet warm day.  A turkey vulture circled overhead, a great-horned owl flushed from it’s feather-lined nest to stare suspiciously at us, and brown creepers scurried up tree trunks in search of unseen insects.

After a while a piercing call sounded from the woods about a quarter mile from our location.  Sounding something like a blue jay, the bird repeatedly called until it finally flew overhead and we saw one of our most interesting birds, a red-shouldered hawk.  Similar in shape to the familiar red-tailed hawk but dissimilar in color and habits, red-shouldereds prefer large, wet forests instead of grassy fields.  They are a threatened species in Wisconsin, and are never common here, although you can sometimes find many in places like Florida where they both nest and spend the winter.  They are medium to large hawks which have banded tails and pale rusty underparts, and indeed rusty shoulder patches.  They prefer many acres of swamp forest habitat for breeding, and are a hawk that enjoys a varied diet consisting of small rodents but also frogs and snakes.

Their nests are twiggy masses about two feet in diameter lined with moss and conifer twigs.  They are often in a crotch of a tree trunk near the top, and they lay 2-5 eggs.  Interestingly, they are both mobbed by crows but sometimes join crows when they mob great-horned owls.

There are estimated to be about a million red-shouldered hawks in the world, almost all of them nest in the U.S.  Their population was reduced a lot by the use of DDT and changes in the forest, but overall the population is considered to be relatively stable.  In Wisconsin, however, their population is being monitored closely and they are still considered threatened. As many of these hawks reside in states south of here, one wonders if their range is expanding northward with a warming climate.

The best place to hear or see the red-shouldered hawks at Woodland Dunes is the area near the east end of Goodwin Road. There are several trails there, and a large wet swale.  The birds have a piercing “keeer” call that is repeated, often as they fly over.  If you see one or both of them, consider yourself lucky, as they are an uncommon part of our local natural history.  And while you’re there, enjoy the many peepers and wood frogs that are just starting to sing.