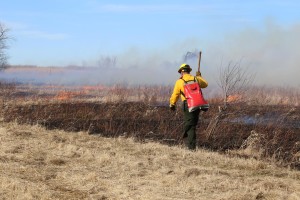 Prairies often stir up images of vast grassland, buffalo, and an undisturbed natural landscape.  We often hear how people are the cause of change in the land and the environment around us.  While people do have a big influence on their environment, the natural environment is constantly changing even without the influence of people.  Left unmanaged, dead prairie grasses and wildflowers build up on the ground over time, making it more difficult for new plants to grow by shading them out and storing nutrients rather than releasing them for new plant growth.  A stressed prairie is more likely to be a good place for shrubs such as red osier dogwood to grow, and one or two shrubs become many.  Next the pioneer trees come in, such as paper birch and quaking aspen, followed by the maples, ash, spruce, oaks, pines, and other mature forest species.

This natural succession occurs all the time but there are natural checks in place to keep some prairie land from changing.  These checks include wildfires, started by lightning or people, and grazing, which could mean buffalo or cattle for example.  Grazing stimulates new plant growth and grazers can create open areas of soil with their hooves.  Wildfires not only release the stored up nutrients back into the soil, they also blacken the ground, allowing the sunlight to warm it and stimulate growth of dormant plants.  Prairie plants thrive in the post-fire soil, while any encroaching shrubs do not.  The occasional fire every few years prevents the prairie from becoming a forest.

At Woodland Dunes, there are many different habitat types.  While the majority of the preserve consists of ridge and floodplain forests, other habitats such as shrub-carr, sedge meadow, prairie, and cattail marsh are also present.  In order to preserve the prairie habitat and the wildlife it supports, controlled burns of the prairie must occur.  Woodland Dunes manages the prairie habitat by scheduling controlled burns of different sections of the prairie habitat on a rotation.  This is done in the early spring, before the grassland birds have started nesting, and only on small sections,  in order to reduce the impact of wildlife on other animals such as insects and amphibians.

This year, with the help of Fox Valley Technical College’s Wildland Fire program, a controlled burn was conducted on part of the native grassland planting at Coneflower Trail on Goodwin Road.  Fire breaks were mowed around the burn area last fall and again this spring to prevent fire from entering surrounding areas.  Based on weather conditions, additional areas of firebreaks were burned upwind (called a backburn) until it was deemed safe to light the upwind part of the field.  The burn area was surrounded with technicians with appropriate safety and fire control equipment, and the 15 acre burn was conducted without incident.  The result is a healthy habitat for many prairie species and a great area for people to view them.

We probably have an instinctive fear of fire which has aided the survival of our species for many years.  Many other species can cope with and even depend on fire to keep their environment suitable for them, and for land managers fire is an important tool to help manage those habitats.  Such burns, like most things, can be done safely if adequately planned.