So tell me, what’s driving you nuts? Could it be the bushy tailed fiend who steals all the bird seed out of your feeders? As a Wisconsinite, I have had my fair share of stories with squirrels. From friends who had these furry creatures as roommates in their walls to up close encounters, I decided to do a little more research into our rambunctious rodents. As it turns out, Wisconsin is home to five different types of squirrel. This includes gray squirrel, fox squirrel, red squirrel, and two types of flying squirrel.

The gray squirrel, Sciurus carolinensis, can reach about 18 to 21 inches in length and weigh about 16 to 28 ounces. Surprisingly, about 8 to 10 inches of their body length is actually their tail. While most gray squirrels appear to have a grayish coat, it can also vary in shades of black, white, and golden yellow. These squirrels can typically live within any type of habitat ranging from wooded to city. Since they are foragers, they eat wide arrays of plants, nuts, and fruits. Gray squirrels can be a problem, though, when they find access inside a building. So for my friend harbouring squirrels in her wall, you may find insulation and wiring damage.

The fox squirrel, Sciurus niger, is the largest tree squirrel with a length of 20 to 22 inches long and weighs up to 24 to 32  ounces. Their rusty brown undersides which resemble a gray fox’s coat color help explain its name to distinguish it from the gray. The fox squirrel lacks the white tipped hairs like the grey squirrel and has shorter rounded ears. These squirrels typically live in rural areas that are a mix of woods and farms, or are commonly found in southern Wisconsin. Common traits with the gray squirrel include foraging acorns, nuts, or corn, as well as trouble. Although, these squirrels will change their diet to whatever food is available to them. 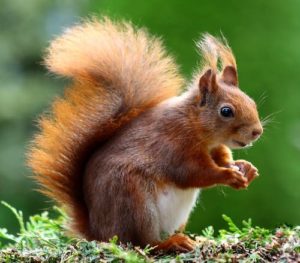 The red squirrel, Tamiasciurus hudsonicus, are generally 11 to 14 inches and weigh 7 to 10 ounces. While its tail takes away 4  to 6 inches of its total length, it can be easily identified by the small size, larger ears, white eye ring, and their reddish coats. An interesting fact about these small creatures is that in summer, a stark black lateral line appears on both sides of its body separating the white and cinnamon colored coats. Winter means the coats colors get richer and ears get more tufted, but the black lines disappear. Red squirrels usually live in the northern two thirds of Wisconsin in the coniferous or mixed woods. Their foraging includes pine seeds, mushrooms/fungi, nuts, fruits, and berries. We have seen a couple here at Woodland Dunes, and have promptly named the most frequent visitor Samson.

The flying squirrels, Glaucomys sabrinus (northern flying squirrel) and Glaucomys volans (southern flying squirrel), are the smallest Wisconsin tree squirrels. The northerns are about 10 to 13 inches and weigh 4 to 8 ounces. They are slightly redder with a grey underbelly tipped in white. The southern is 8 to 10 inches and weighs 2.5 to 3.5 ounces. Instead of a grey belly, they are completely white. While its name suggests “flying,” they can only glide between trees. This is done by a fold of skin along each side of its body that turns into “flaps” helping the gliding process. Turns out they can glide for almost 150 feet and control it’s directions by its flattened shaped tail. Both flying squirrels are also nocturnal animals that live in wooded areas or some suburban areas with mature vegetation. Foraging includes nuts, berries, insects, seeds, and fruit. While they can cause damage inside buildings like their bigger relatives, they usually gather inside communal dens in hollow tree cavities. Aren’t squirrels nuts!