This was written by Anna Hall, a Woodland Dunes intern from Silver Lake College 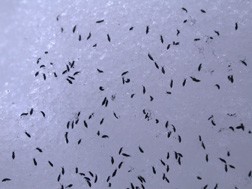 Spring is fast approaching, and as the weather warms, snow and ice are beginning to melt. These new patches of water draw one of the very smallest of creatures: springtails. Springtails, also known as snow fleas, thrive in wet or damp areas, where they gather in large clusters. From far away, they can look like little specks of dirt or particles of pepper in the snow.

When I first encountered springtails, I didn’t even see them until they were inches from my face! I was hiking in the woods with another staff member, and she picked up a branch from the forest floor and said, “Ooh, look!” I couldn’t see what she was talking about, so I leaned in, and sure enough, right before my eyes, a mass of tiny black bugs completely covered the branch. At first, I thought they were just regular fleas because of the way they were jumping, but I soon learned that these were snow fleas, a very different creature.

Springtails get their name from the way they spring a few inches into the air when disturbed. They have a little forked appendage called a furcula that releases in order to launch the bug. Springtails are not considered to be true insects because they do not have an external chewing mechanism; their’s is internal. One characteristic that varies is their coloring; they can be any shade of brown, gray, black, or white. 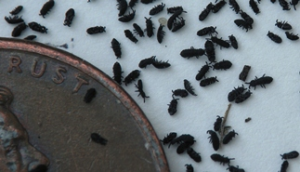 Springtails are often considered to be no more than a pest, especially since they may take up residence in a home with patches of high moisture, such as plumbing leaks or a damp basement. Fear not, these little creatures are harmless; inside the home they’re merely a nuisance. We really do need springtails in the ecosystem, as they greatly aid in plant nutrition. One way they help plants is by eating some of the bacteria and fungi that gather around plants’ roots. In doing this, they keep those materials from increasing to toxic levels that would harm the plant. Springtails also help speed up decay by ingesting organic matter from their environment and releasing it back through their nutrient-dense feces.

Remarkably, these little creatures don’t freeze due to a special protein housed in their tiny bodies. This protein contains glycine, which is an amino acid. And, as I’m sure you remember from school, amino acids are the building blocks of proteins! In the case of springtails, the glycine binds to little ice particles and keeps them from growing, saving the springtails from becoming bugsicles.

If you’re curious about springtails and want to go searching for some, pull on your boots, venture into the woods on a sunny day, and look for puddles or damp-looking patches. More than likely, there will be some springtails clustered on the odd branch or log, or under some leaf litter. Happy adventuring!