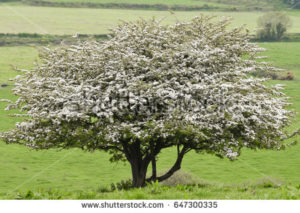 During the season of St. Patrick’s Day, one is reminded that Ireland is represented by the color green, and that the nickname the “Emerald Isle” is derived from the plant life of the island.  Of course the clover leaf, with it’s three leaflets that St. Patrick supposedly used to illustrate the Holy Trinity is most associated with all things Irish, but there is another plant that is very important to Irish folklore and is native to our area as well.

The hawthorn is a small, thorny tree that is found growing wild in both Wisconsin and Ireland, which has been modified through cultivation to become a landscaping favorite.  It is especially beneficial to have native plants in our yards, and hawthorns, or thornapples as I was raised to call them, provide flowers for pollinators and fruit for birds and other animals. Tiny little apples appear similar to the fruit of the crabapples.  Hawthorns aren’t usually abundant, but they can be numerous on certain parcels of land.  They like lots of sun, so are often found out in the open, at the edge of a woods, or just within areas that used to be fields but are becoming forests again.  They’re also found in old pastures- most likely cattle wouldn’t want to graze on the thorny branches and so left them alone.  Nevertheless, they remind us of past human presence on the land. 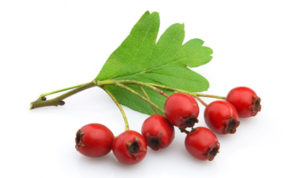 Wild hawthorns contain long thorns on their limbs- often two or more inches in length.  Fortunately for homeowners, breeders have developed thornless varieties which aren’t quite so dangerous.  Wild hawthorns are also notoriously hard to identify as to species- they readily interbreed with each other, and there are perhaps a thousand different species, or subspecies, in North America.  Most botanists and naturalists are content with knowing that a tree is one of the hawthorns, or Crategus species, and leave it at that.

In Ireland however, the hawthorns have another, more mystical dimension.  To early people and those who still subscribe to such lore, they were/are considered sacred trees and are called Sceach Gheal  in the Gaelic language.  The Celtic people also have a tree alphabet or horoscope for which the hawthorn, or Huath is the sixth symbol.  They are considered homes for the fairies or Sidhe, because they bloom at the time of the festival of Bealtaine in spring.  According to folklore, one does not dare kill or injure a hawthorn lest they risk the wrath of the fairies.  There have been bitter disputes in Ireland over re-routing roads to avoid the removal of a hawthorn tree.  Conversely, some people hang ornaments, cards, pieces of clothing, and the like on a hawthorn to gain the favor of the fairies, hoping their wishes might be granted.

I have a distinct recollection from my childhood of an incident in which my grandfather, out mowing on his Farmall Cub tractor, came too close to a thornapple tree, resulting in his hand being impaled clear through by one of its thorns.  Recently, another member of the family, also on a tractor, accidentally injured a hawthorn after which a limb fell and grazed his head.  Of course I am not the least bit superstitious, despite what may appear to be clear warnings for disturbing the trees, but just in case, I think I might add a St. Patrick’s Day adornment to the hawthorn near my house to keep the fairies happy. And we’ll plant a few extra hawthorns in the preserve this year.  These days one needs all the help one can get.