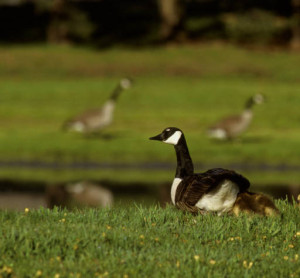 Spring strikes me as a very dynamic time of year, with elements of winter and summer colliding on a shifting basis.  Across the country we see blizzards and tornadoes in March brought on fronts with powerful winds and huge surges of moisture.   Millions of birds observe and wait for the right conditions, then surge northward like rivers of living things moving to repopulate breeding areas they left behind last fall.  For early migrants, which may only travel to the mid-south in winter, they are greeted by a sea of mud on their return, and remnant patches of ice and snow.  Not the most inviting landscape, but the urge to claim the best nesting areas must be very strong.

At the nature center, a pair of geese has taken up residence the last several years- I think of them as Fred and Ethel.  They show up in late February or early March to claim the pond and yard at our headquarters as their summer home.  They are not banded or marked in any way, so I can’t be sure it’s the same pair of geese, but their behavior is consistent from year to year so I suspect they are the same birds.

When they arrive, David’s pond is frozen, and they stand for long periods on the ice surveying their bleak surroundings.  I wonder if they are second-guessing themselves and their decision to return so early.  They walk around the yard, honking when other geese fly over, parading over to the bird feeders to vacuum whatever seed has fallen to the ground, and occasionally flying up to perch on top of the nature center or barn to appear as some kind of large fat ornament or wind vane.

By the beginning of April Ethel has made a nest in the marsh grass and is sitting on eggs.  She keeps a low profile, stretching her neck out over the ground to be less visible, while Fred stands nearby.  About this same time the ospreys return to their nest also, and quickly get down to their own reproductive activities.  Both females persist in covering their eggs even in the miserable snowy weather that happens occasionally.  By late April or early May a clutch of young have hatched and follow their parents in and around the pond and to the bird feeders.  Fortunately, the geese are territorial, and keep others of their kind away from their pond.  One family is more than enough to fertilize our lawn, and we are happy to not have more.

Fred and Ethel defend their young from foxes and the like, although I don’t know what they can do about the snapping turtles that ambush from below.  As for all wild animals, life isn’t easy even in a nature preserve, and usually the number of young decreases, especially in the first month.  Those that survive have grown quickly and by early summer start to resemble their parents in a faded sort of way.  About that time the family abruptly leaves the yard and pond for the larger habitat area out along the West Twin where they have hundreds of acres of sedge meadow, marsh, and open water.  Sometimes families are combined, resulting in few parents with many young while the other adults congregate with each other for some time away from the kids.

The behavior of this particular pair of geese is just one of thousands of such occurrences that happen all around us this time of year.  Every day brings new birds migrating as well as other animals emerging from winter sleep to try and assure that their species will survive.  When I was in school we were cautioned about being objective in our observations of animals and behavior so as not to interpret their actions as anything other than what could be measured scientifically.  I admit that is very important, but the longer I’m around the more I enjoy the things that reveal the personalities of living things- their affinity for their mates and their summer homes, their persistence, fierce parental care, and sometimes just their “attitudes”.  I look forward to watching these little dramas unfold.

And so another new year begins for wildlife!