It’s easy to get hung up on specifics in our interactions with nature, like what bird just came to the feeder, or how do I keep squirrels away, or why don’t I see deer when I’m hunting.  It makes sense; we are most aware of the things that obviously impact our lives.  Sometimes, though, I think it’s important to look at a bigger picture if we really want to understand the role of living in the world.  That we are completely immersed in the life around us I think can make us oblivious to the way the world works and our place in it.

I listened to an interesting TED talk lately (although I’ve forgotten who gave it), in which the speaker began by asking the audience what are the most numerous plant and animal in the world.  You would think that to be pretty obvious, right?  Something so abundant must be encountered by us every day and should of course be easily recognized.  Well, I had a hard time with the question- I couldn’t decide what might be so abundant and still be considered a plant or animal. 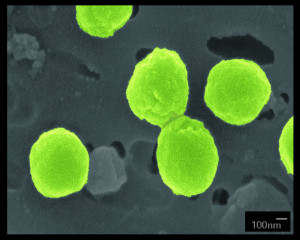 The answers were- a cyanobacteria or single-celled blue-green algae is the most abundant plant.  They float throughout all the oceans of the world, and similar species inhabit many fresh waters.  They are evidenced by the oldest fossils on Earth so have been here for billions of years, and plants of their kind gave rise to the oxygen in our atmosphere.

The most abundant animals are nematodes- tiny worms that live in the soil.  They feed on organic matter in the ground, transfer nutrients, and are very important components of soil ecosystems.  It was mentioned in the talk that if one removed all the soil and rock from the Earth, the outline of the continents could still be seen in the enormous mass of nematodes that would be left behind.

Despite the fact that these organisms are tiny to microscopic in size, they have a huge role in making other life possible.  More and more we are coming to realize that the small things are perhaps the most vital components in the function of healthy ecosystems.  Understanding this changes one’s view on how those components are connected and what we need to consider if we want ecosystems to continue to function the way they did or do now.

For example, Woodland Dunes has always valued birds for many reasons, and we would like to have our nature preserve continue to be a great place for them to live or stop during migration.  To do that we want to provide healthy habitat that has food, shelter, cover, and clean water for them.  For food and shelter we need plants to provide fruit and seeds and homes for the insects birds eat.  In order for those plants to reproduce, many need pollinating insects so that they can bear fruit, and the insects in turn need the plants to provide the pollen and nectar and leaves to chew on.  The plants, however also need soil that is its own complex ecosystem- full of countless creatures including those nematodes, insects, bacteria, and even fungi.  We think of fungi in terms of decomposing dead things to release the nutrients back into the soil, but it appears that they do much more; like helping plants absorb those nutrients by growing on their roots.  And because the fungi can form immense threadlike networks throughout the soil, it also appears that they help plants communicate with one another through what one writer termed the “wood-wide web”.

So if we want to preserve wildlife like songbirds, sooner or later we are going to have to consider a lot of other living things and their welfare, like fungi in the soil.    It seems cliché nowdays to say that everything in nature is connected to everything else, but in truth it seems we are continually learning more about how fascinating and important those connections are.  And, it’s challenging to even try to comprehend those connections and how they include every living thing, including us.

Whether we like it or not, nature is everywhere, and we are swimming in an ocean of life.  And, in a lot of respects, the smallest parts may be the most important.