I am fortunate to not only live on an old farm, but work at one as well. In both places there have been planted trees that were intended to feed people but a hundred years later have become primarily wildlife feeders instead. At both locations the old apple trees bear fruit that is rather unimpressive compared to modern varieties both in terms of appearance and taste, but obviously I am not a good judge of what is important. During the winter cedar waxwings, woodpeckers, house sparrows, and starlings chip away at the frozen fruit, sometimes knocking apples to the ground where deer and rabbits find them.

At Woodland Dunes, the old Rahmlow family orchard in the front yard also includes an enormous red mulberry tree. Its not the most attractive landscape feature- it always has some dead branches. In the cool Two Rivers climate, it takes a long time to leaf out in spring and I often wonder if it has died. But eventually it wakes up, leafs out, blossoms, and from mid summer through September bears thousands of red an purple oblong berries. During that period the waxwings are there continuously, along with robins and other thrushes, buntings, finches, woodpeckers, warblers and vireos- the activity is endless and I really should take the time to record how many species use the tree simultaneously. Beneath the tree is a water feature, made to mimic a shallow flowing stream. Eventually it appears almost to be flowing more with fallen mulberries than water, and of course the deck under the tree and everything around it is to some extent stained purple from berries and bird droppings, extending all the way over to the deck at our headquarters with it’s chokecherry tree which adds to the lavender mayhem.

Over time I’ve come to view these old, seemingly undesirable trees as gifts from a lost generation. The people who planted them, now long passed, had no idea how much they would ultimately be used by wildlife, and how much joy they would bring to people who appreciate birds.

So now, spring is knocking on our doors. My relatives in Tennessee are already planting the first hardy crops in their gardens, and we in the North are dreaming of doing the same in a couple of months. I would hope that as we plan for this years cultivation, that perhaps all of us who value birds might take a look at our yards, whether they be sized in terms of square feet or acres, and think about what we might plant for wildlife. Some species are easy to grow- a dogwood or viburnum shrub or a juniper for both cover and food, a flowering crabapple, some wildflowers, as long as they aren’t something invasive. A little island planting of any size that provides a combination of trees and fruit-bearing shrubs would likely be used year-round, bring more species into your yard, reduce the time you spend mowing- and give you more time for birding! I’m told that such plantings done by Aldo Leopold can still be found at a number of places beyond the beloved arboretum.

We have changed the landscape, converting native habitat to farmland and urban and suburban expanses. Birds have no choice but to try to use these areas to survive. It is not difficult to plant a few shrubs or trees that can make a world of difference in the quality of the landscape. And that quality can continue to be improved long beyond our lifetimes, improving our communities for both birds and people- a gift for the ages. Or, if you don’t like your neighbors, you can always plant that mulberry tree along a property line by their house, and inflict the purple menace on them- just kidding! Happy Spring! 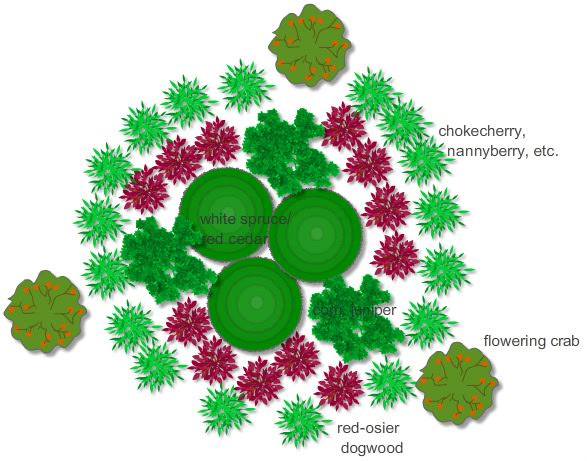 A drawing of one version of a “bird island” landscape planting that we are doing at Woodland Dunes.