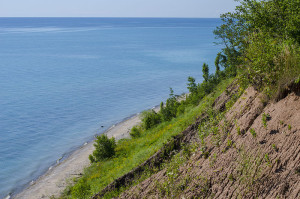 Along the Manitowoc River in the town of Manitowoc Rapids where I grew up, there are a number of areas where the river flows against steep clay bluffs.  The river erodes the base of those, which encourages slumping of glacial-laid material from above and resulting in bare clay cliffs.  In my neighborhood, one of these areas, just upstream from Camp Vits, was known to us as the “clay banks”.  The river bottom was constantly shifting there, but some deep holes were good for fishing.  At the base of the banks the soil was wet from seepage, and interesting plants grew along with lush cedars.  It was one of my favorite boyhood spots, partially because it took some effort to get there and there were seldom people around.

There are a lot of such places in Manitowoc County, not only along the river, but along Lake Michigan as well.  Like other Great Lakes, what we now know as Michigan was once a river valley until massive continental glaciers came along thousands of years ago.  Those glaciers scooped out large quantities of soil from some areas and re-deposited it in others.  Glaciers advanced and melted a number of times, and each time they left additional material with different qualities- clays, sand, gravel, sometimes mixed and sometimes in layers.  Some layers conduct groundwater, and where they are exposed in the sides of banks form springs or seeps that are often constantly moist.

Such clay banks or bluffs along rivers and the Lake constantly change.  Waves or current at the base of the bluff erodes soil and encourages slumping of material from above, especially when water levels are high.  Seepage areas also weaken the bluffs and make them less stable and more prone to slumping.  Vegetation often tries to take hold and may stabilize bluffs for a while, but can fail unpredictably especially where the plants are shallow rooted.  Sometimes those plants are simple relocated down the slope, and continue to grow.  Just like a forest, which may appear stable until a windstorm comes along and creates blowdowns which begin a cycle of growth again.  The slumping clay bluffs, although they can cause problems for people building too close to their edge, are very interesting places populated by plants adapted to change and the sometime harsh chemical nature of the soil.  Plants like white cedar, certain sedges, and interesting wildflowers like fringed gentians tolerate the calcium enriched soil and water of these areas which are also important as stopover sites for migrating songbirds coursing along the shore of the Lake.  However the constantly changing and newly exposed soils of these areas are also vulnerable to the growth of non-native invasive plants like Phragmites.  Although Phragmites has extensive root systems and forms dense colonies, those roots are not deeply rooted and don’t stabilize bluffs as well as deeply rooted native plants like those found in prairies.  Plus, Phragmites doesn’t benefit native wildlife very much, which makes life harder for migratory birds.

There are efforts going on to remove invasive plants from the bluffs and encourage native plants in their place involving a number of organizations including the Lakeshore Natural Resource Partnership and the Manitowoc Co. Lakes Association.  Through those efforts we are not only rediscovering some very interesting and dynamic habitats, but are attempting to manage them for the benefit of people, wildlife, and the Lake itself.

We know from places like Woodland Dunes, where ancient beaches now lie a mile from the present shore, that Lake Michigan and its shoreline are dynamic and have changed much in the last 10,000 years.  That change will continue, and our challenge is to understand it, and manage these special places for it in the best way possible.