Spring is a time for repair and improvement, and the nature center has been a very busy place lately.  Volunteers have constructed about 500 feet of new boardwalk on Willow Trail to permit hikers to more easily pass a section of trail that has been flooded more and more in the past couple of years.  Fixing and improving things seems to be universal this time of year- birds building nests, bumblebees enhancing their burrows so that they can lay eggs, mammals tidying up their dens for their new young.

Another project at the nature center involves replacing part of a deck next to the building, removing rotted boards that were close to the ground.  As the boards were taken up, we discovered a maze of tunnels beneath, and got just a glimpse of the animals that made them- star-nosed moles. 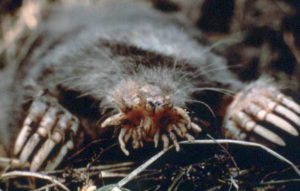 The star-nosed mole (Condylura cristata) is one of two mole species found at Woodland Dunes, the other being the eastern mole.  Both have massive feet and claws with which to excavate tunnels and burrows and both are harmless to humans.  They are covered with the softest fur- dark gray in color.  The nose of the star-nosed mole is adorned with fleshy tentacle-looking structures which help them feel their way around underground and detect the earthworms and other small animals on which they feed.  They have 22 of these unique structures, in which they have something called Eimer’s organs, and they are incredibly sensitive although strange looking.  Their sensitive nose structures allow them to very quickly determine if something is edible or not, and one study found that it took them only 227 milliseconds between the time they encounter prey and consume it.  Also, they are able to smell underwater, exhaling bubbles of air and them inhaling them again.

Star-nosed moles, although I imagine them leading quiet lives underground, are very active animals.  They have very poorly developed sense of sight, probably because there is not much that can be seen underground in the dark.  They spend much of their time burrowing in moist soil, and are often found in wet areas.  Its often in these wet places that we find the proverbial “mole hills” that they construct.  Mole hills are lumpy small mounds of soil made when the mole pushes up clumps of dirt to the surface from below.  They are small, typically less than a foot in diameter and just a few inches high, so it would be difficult to make a mountain out of one!  They are also good swimmers and look for food in the water, where they in turn may be eaten by fish such as northern pike.

Moles raise one brood of 4-5 young each year, typically in late winter or spring.  They have probably benefited from the 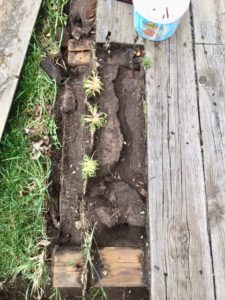 introduction of European earthworms by people (there were no earthworms in Wisconsin before settlement by Europeans).

Moles are not dangerous, and I cringe when I encounter people talking about the “damage” that moles do to lawns and how they need to be controlled.  Lawns are not a natural ecosystem, and moles do nothing more than hunt for small animals in the soil – occasionally making their mole hills.  Mole hills are not permanent and the moles move on, so there really isn’t a need to kill them.  They are an important native animal and should be appreciated as such.  They and their kind are unique among the mammals and probably do much more good than harm.  We’ll be careful not to disturb them more than needed as we re-assemble our deck!

photos: star-nosed mole by the National Park Service, mole tunnels beneath the deck at Woodland Dunes