I find that every time I put an item “somewhere that I won’t lose it” the item always ends up lost.  My memory isn’t bad necessarily, it’s just that if I try to not lose something, it definitely ends up lost.

I was replacing a fence around one of the gardens here at Woodland Dunes when I saw that haphazardly buried in the soil were a few acorns. They were in pretty rough shape – clearly they had been in that soil for awhile. I certainly sympathized with that squirrel or whatever animal lost those acorns, as I am sure it too felt that it was placing those nuts in a spot that it would remember. Doesn’t that make you wonder just how many of the food stashes placed by animals get completely forgotten about? Well, one animal in particular has adapted to avoid that very problem, and it happens to be one of my favorite little birds. 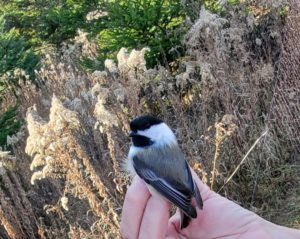 gets scarce. Chickadees are an adorable example of an animal that does just that. Oftentimes you will see chickadees go to a bird feeder and fly away with seeds and then return again and again. Chickadees will cache their seeds in bark, in pine needle clusters, on crevices of branches, in gutters, under shingles, and wherever else they find that can house some seeds. It has been estimated that chickadees store away as many as one hundred thousand food items, like seeds, per year. The question is, if I can’t even remember where I placed a book that I wanted to read the next day, how can these small birds remember where countless stashes of seeds are that they hid months ago?

Scientists have shown that Black-capped Chickadees are able to increase their memory capacity during the fall by adding new brain cells to their hippocampus (which is the part of the brain that controls learning and memory). In the fall, the chickadee’s hippocampus expands in volume by roughly 30% and then come spring the hippocampus will shrink back to normal size. How cool! If they see that they are being watched, the chickadees will wait to store away their food, especially if another chickadee is watching. You wouldn’t want to hide food and use up good hippocampus space only to have your neighbor come snatch away your seeds, so I would be secretive about my food stashing too! Other research done has also shown that chickadees will discard cells that hold older memories and then replace them with new cells for storing fresh memories. I sure wish I could swap some memories of me tripping over my feet for being able to remember where I put my keys!

As you can imagine, the ability to remember where the bird stored its seeds helps it survive winter far easier than if the birds couldn’t remember where they put all of those collected seeds. Research has been done on chickadees that live in the Sierra Nevada mountains as to how their memory correlates to their ability to survive, and they found that the individual bird’s memory has a direct impact on the individual’s survival. Given that, I would definitely be on the lower survival end in the chickadee world. Upon learning about the chickadee’s amazing memory capacity, each time I lose something now I will hopefully be encouraged to become better organized so that my chickadee survival rating increases a bit. Until that happens, I will just marvel at my favorite little birds that would definitely win at any memory games.