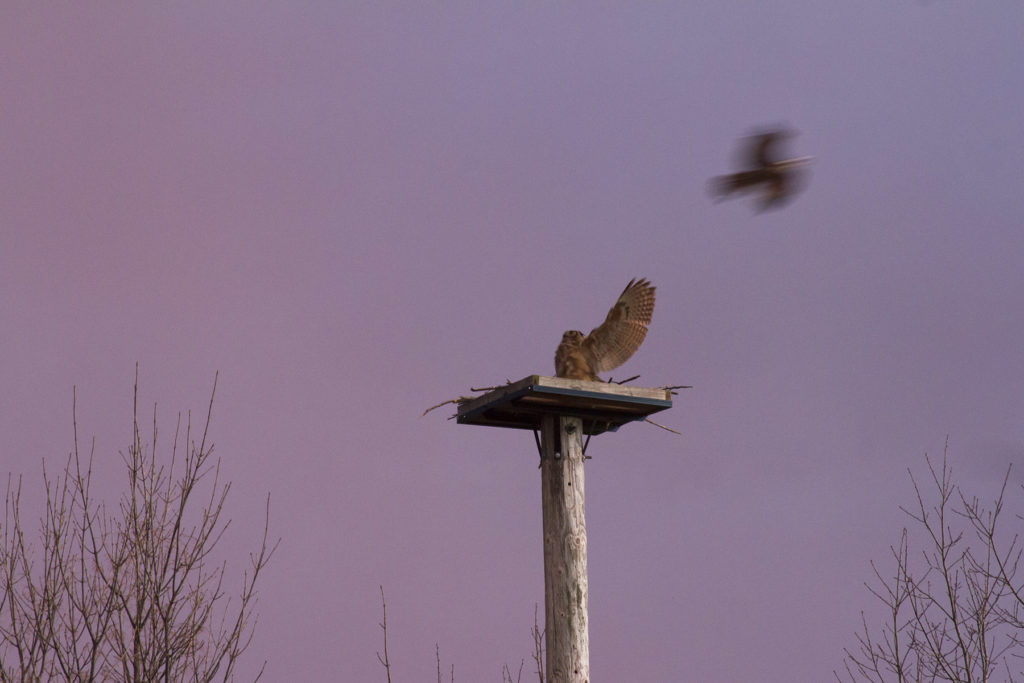 She fell in love first. Probably around December or January. Then she found a little home and let her maternal instincts kick in. No one thought much of it, because honestly, no one knew.

Then about two weeks ago I received this text: “There’s either a bobcat or a Great Horned Owl in the Osprey nest.” A wildly curious and off-kilter part of me was hoping it was the bobcat. (Just imagine what it would look like for a bobcat to scale a 40-foot Osprey pole, maneuver itself up and over the wide platform, before settling into a flat nest of sticks.)

Not holding my breath for the bobcat possibility, I packed my camera and binoculars to assist in identifying this discovery. Once there, I could tell it wasn’t my impish bobcat wish, but a Great Horned Owl nesting with its plumicorns (ear tufts) giving it away. Recently, I went back in hopes of finding evidence of owlets.

When I arrived that night, dark metallic-gray storm clouds were moving in, so I knew I didn’t have much time to assess the nest. As the barometric pressure dropped, so did the mother owl. In fact, she got so low that I couldn’t see any evidence of her or owlets. Then it began to rain so I left, but after 30 minutes the sun came back out – and so did I.

As I walked back down the path to the owl, I noticed her standing upright on the platform with two fuzzy gray lumps beside her, possibly drying off. Then the real excitement began. An Osprey, wanting to reclaim its platform, started buzzing the owls – circling high above and then swooping low – right over their heads. But the Great Horned had claimed this site in the winter and was having none of it. She carefully shielded her owlets by spreading her feathers wide and moving closer to her babies. As the Osprey approached she would lift up and over the owlets, swiping her massive wingspan at the Osprey. In careful descent, she landed on the other side of her babies and turned to spot the Osprey in air – ready to defend again. This type of behavior lasted for seven minutes, with at least four different approaches. Osprey have poor night vision, so with the dimming of the sky, this one fled.

What an ironic twist involving man. This platform was built specifically for an Osprey to help their population; yet, a Great Horned Owl, being an opportunist, took over the unused platform in the winter. It just goes to show you, predicting nature is like predicting the lottery, you never know who’s going to win. And cheering for both seems the reasonable answer.

In this scenario, the Great Horned will undoubtedly be the victor. Those owlets will be on the platform until May, forcing the Osprey to find another site to start its family. At any rate, it’s exciting to have two large predator birds doing so well in our environment. It will be interesting to see what happens next year.

Note, this site is not at Woodland Dunes Nature Center