↓
Home Menu ↓
Skip to primary content
Skip to secondary content
Happy New Year!  Indigenous people of the north consider the onset of spring and the maple syrup season as the start of the year, which makes more sense to me than designating the coldest, darkest part of winter as such. However, spring on the lakeshore is an exercise in character building. In recent years it seems to progress excruciatingly slowly, while fall seems to be extending later into the year.  Still, spring comes and it brings welcome advances of migrating songbirds.
Birders become irrational this time of year as they tick off new species every day – adding to their list.  What a joy to hear bird song in the morning and to have an excuse to get out and roam natural areas in search of them and the first wildflowers.  As one of my favorite songs says- “Don’t it always seem to go, that you don’t know what you’re got til its gone”! 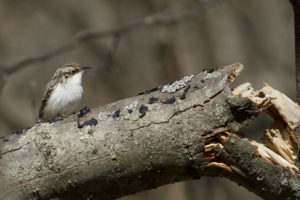 I live and work in large natural areas full of birds and other wildlife. I am lucky and thankful for that, but I didn’t realize how much until I experienced life in a bird ‘desert’.
Recently, I had some medical issues that required an extended stay in the middle of Milwaukee for a couple of months.  The issues were resolved thanks to incredible medical workers to whom I will always be grateful.  However, I wasn’t prepared for the drastic change in environment- I haven’t lived in a large urban setting for more than 40 years.
I was in intensive care for a couple of weeks, in the center of a large hospital complex.  My room had a small window looking out at another part of the building, kind of like a canyon with an opening far above.  For 10 days I saw no birds or other living things at all, aside from people. Then I moved to another hospital floor for another week and a half. From that room I could see some trees about 1/4 mile away, but no birds except for the occasional crow or gull flying high overhead. From there I moved to a small house across the street from the hospital on a very busy street. Ambulances came roaring by every few minutes, along with helicopters and thousands of other vehicles.  Again, the only living things I could see were dormant street trees and people rushing by.  I put up two bird feeders in the small yard and after two weeks I finally attracted six house sparrows!
As March progressed I began to hear robins singing and when I was walking around the block I heard a few cardinals, house finches, and saw geese flying overhead. But that was all. I didn’t even go through a pound of seed for the bird feeders.  After a couple more weeks I was able to walk in a nearby park that had a small forest and lake.  The weather was in the 50’s, and both people and birds flocked to that location. There were a couple of species of gulls, lots of geese and mallards, juncos, chickadees, and one red-winged blackbird.  It seemed like heaven, and it was nice to see so many people with children and pets walking and enjoying the little slice of nature.  It was a very happy place.
Finally, I could return to my home outside of Manitowoc and return to work in Two Rivers. At home I filled bird feeders that had been empty for two months and the next day the usual assortment of birds were back – looking none the worse for wear.  At Woodland Dunes, the marsh was full of geese and ducks and songbirds mobbed the many feeders. Ospreys were again on the nest platforms and tree and fox sparrows were singing from the bush.  Sandhill cranes were in the meadows and flew majestically over the center. It seemed like life was whole again.
My spring experience has been remarkable and humbling.  I am grateful to be alive and to be able to experience spring on our Lakeshore.  I always knew this was a special place, but I’m aware of that now more than ever.  I am also happy to be able to continue to help care for a part of it. I hope that enough people around here also care enough to care for what natural areas we have left. Together, we can do that.  As Red Green always says “we’re all in this together”.
Photo of Brown Creeper by Nancy Nabak