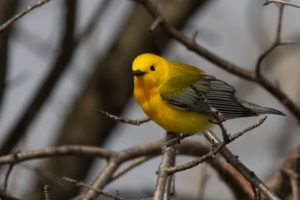 When we crave the sound of a leaf blower over the sound of kinglets and kingfishers, we might be in trouble. I don’t know how far we are from that, but I refused to let the machine get me last weekend.

Saturday was the perfect day – sunny, warm, no mosquitos, and lots of new bird activity. So, I designed my whole day around being anywhere that was wild and free.

Nature is normally a place that I can easily slide into as a party of one, compared to many social functions where an escort on the arm is preferred. But, I knew from weather forecasts that this day was predicted to be glorious and should be shared, so I asked a friend to spend an entire day doing geeky nature things.

We started with a plan to find the Spotted Towhee in Green Bay that has been seen for over 130 days. (Their range is much further west, so this bird is a stranger in town, but welcome.) After glancing with our binoculars for a little more than 10 minutes we found “Spot” scratching and kicking in the dried leaves on a bankside, dabbled in between some White- crowned and White- throated sparrows.

Before we spotted Spot; however, we noticed two other people birding in the same general area. Something very different immediately grabbed my attention… something so un-natural. Instead of camouflage, the man of the two was wearing a short-sleeved, blue and white striped button-down shirt with a PBR logo on the back. Yes, a Pabst Blue Ribbon logo on the back. When he turned to say hi, I noticed a beer convention lanyard around his neck intertwined with his binocular strap.

Now I’ve seen all kinds of things while out birding, many that shouldn’t be mentioned here, but this was a tickle and a treat. Like us, “Mr. PBR” was also getting away from the noise. He was dressed and ready for the convention, but first, he wanted to see a Yellow-headed Blackbird. Gotta’ respect that.

My friend and I scored some great finds that morning, including a Prothonotary warbler (another bird out of its range) that hadn’t been reported as seen by anyone yet. Around 4:00 we were ready for a break so we headed back home and pointed our feet to my back deck. We weren’t there for more than five minutes, tallying up our bird checklist, before man-made noises got the best of us. After discussing what Leopold would do, we loaded up my car with essentials to get us through the evening and headed back out. 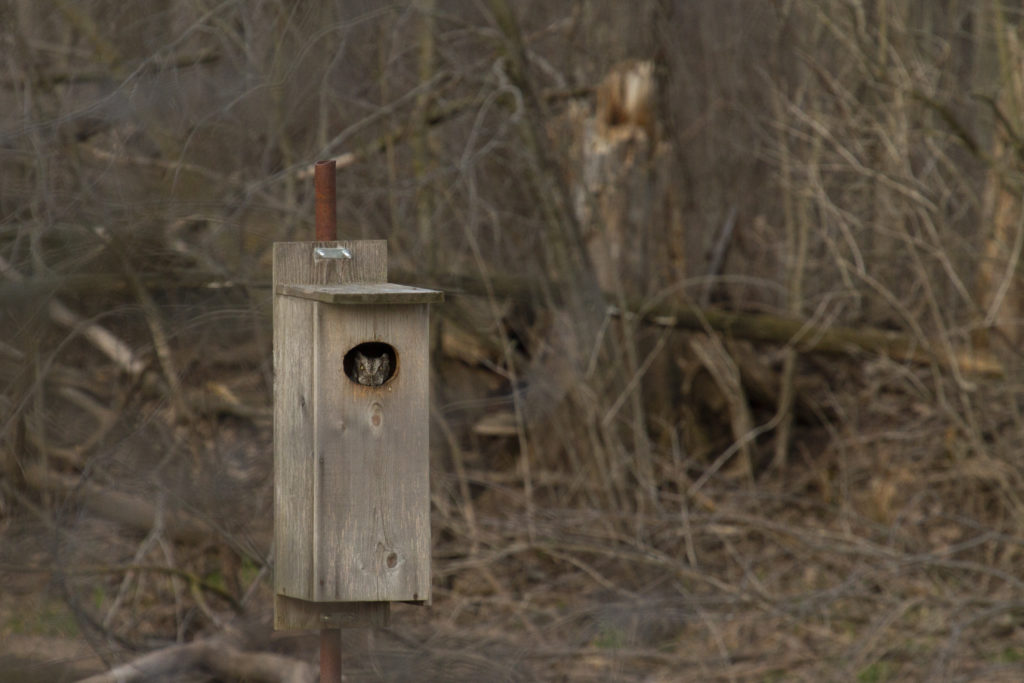 Co-worker, Wendy Lutzke, and I skywrite on the same page. A few weeks ago, she wrote about crepuscular activities (sunrise and sunset) https://www.woodlanddunes.org/tag/crepuscular/ and how much she enjoys them. I love being active during these times as well. My friend and I found a new spot and birded until we could no longer see. We also discovered a monstrous snapping turtle with dragon-like spikes on its tail, semi-stranded in a pathetic attempt of a waterway. Then, we birded some more. We positioned ourselves in a flat, open field and listened to the woodcock courtship, the winnowing of the snipe, a towhee “whipping,” and the low trill of a screech owl. It was the type of magic that only spring can convey.

My friend has lost certain ranges in his hearing due to his job as security for rock concerts in his younger age (kinda’ cool, right?), so he couldn’t hear the peenting of the woodcock while on the ground. However, he could hear it once it was “dancing” in the air and as it was performing its “sky- kiss” on the way back down. His joy was measurable. We stayed out that night until all things of man were quiet – until the day was ready to sleep.

So, bring on the kinglets and kingfishers. Let the organic value of nature take you to the magical land of Wonder. And when noises threaten your serenity, go look for the Yellow-headed Blackbird, a spiky turtle, or just a flat field where you can take in its calming effect.

Photos of Prothonotary warbler and screech owl by Nancy Nabak