↓
Home Menu ↓
Skip to primary content
Skip to secondary content
At last.  The migratory floodgates have opened, and every morning reveals birds new to our yards this year. For those who love wild birds, this season is a feast.  And, with south winds in the forecast for days to come, it is bound to continue. 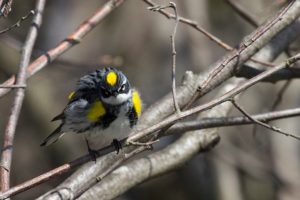 This has been an unusual spring so far, much of the season temperatures have been below normal. However, at certain times there have been very strong south winds, coinciding with the irresistible urge birds have to migrate north.  The result has been many species of birds arriving here earlier than normal, despite the cold. Warblers, orioles, hummingbirds, tanagers, all showed up in late April, a couple of weeks before we typically expect them, and much prior to the usual peak in mid-May. I’m sure they preceded the typical insect hatches that provide much-needed food for them as they travel, and there must have been some long, cold nights for many migrants. Still, they keep coming, and my first steps outside in the morning are like traveling to a new world with new voices to greet me. White-throated sparrows, house wrens, a towhee, the first swamp sparrow for our yard- all are exciting finds this time of year. In a few weeks their songs will become just a part of the normal background noise.
Some are nesting.  Ospreys are on the nest, Canada geese are herding their chicks around, great horned owl chicks are starting to venture out of the nest onto neighboring branches, and bald eagles have been feeding young for some time.  On Cattail Trail at Woodland Dunes, a pair of chickadees is excavating a nest in a broken alder shrub.  Woodcock are energetically courting, and turkeys are tending nests with eggs soon to hatch. Recently, a visitor to our trails observed a fisher carrying a turkey egg, bounding over logs in the swamp.
Last year, red-shouldered hawks successfully nested in our State Natural Area.  Researchers were able to catch and band the female, who was also fitted with a location transmitter. That bird made many trips crossing the preserve, hunting and feeding her young. This year, a pair of red-shoulders returned to the same nest, but not the same female. So far, the nesting is successful, and the new, younger female is incubating eggs. With fishers in the area, we installed a smooth metal predator guard on the nest tree. The female sat on her eggs the whole time the guard was installed.
The bald eagles on the West Twin used the same nest as before, but have been off the nest the last several times we checked.  Bald eagles are susceptible to avian influenza, which they contract by feeding on infected waterfowl.  We hope that our neighborhood nestlings haven’t suffered such a fate. In that case, we can only watch and hope. To be safe, we are limiting bird feeding right now at the Nature Center, using only tube feeders which can be wiped down with a sanitizing wipe frequently.  However, feeding oranges and jelly to orioles would seem to be reasonable, or putting up hummingbird feeders, as fewer species gather at those. We’re hoping that influenza subsides in the next few weeks- early spring is commonly a time for bird disease concerns.
With warmer weather promised, take some time to treat yourself to walks outdoors. Even five minutes can restore your spirit and improve your well-being.  Shin ri roku, the Japanese term for “forest bathing”, can cleanse your mind in ways few other things can, and put you in touch with the many fellow creatures which are so busy bringing life to our long-awaited spring.
photo of Yellow-rumped warbler by Nancy Nabak