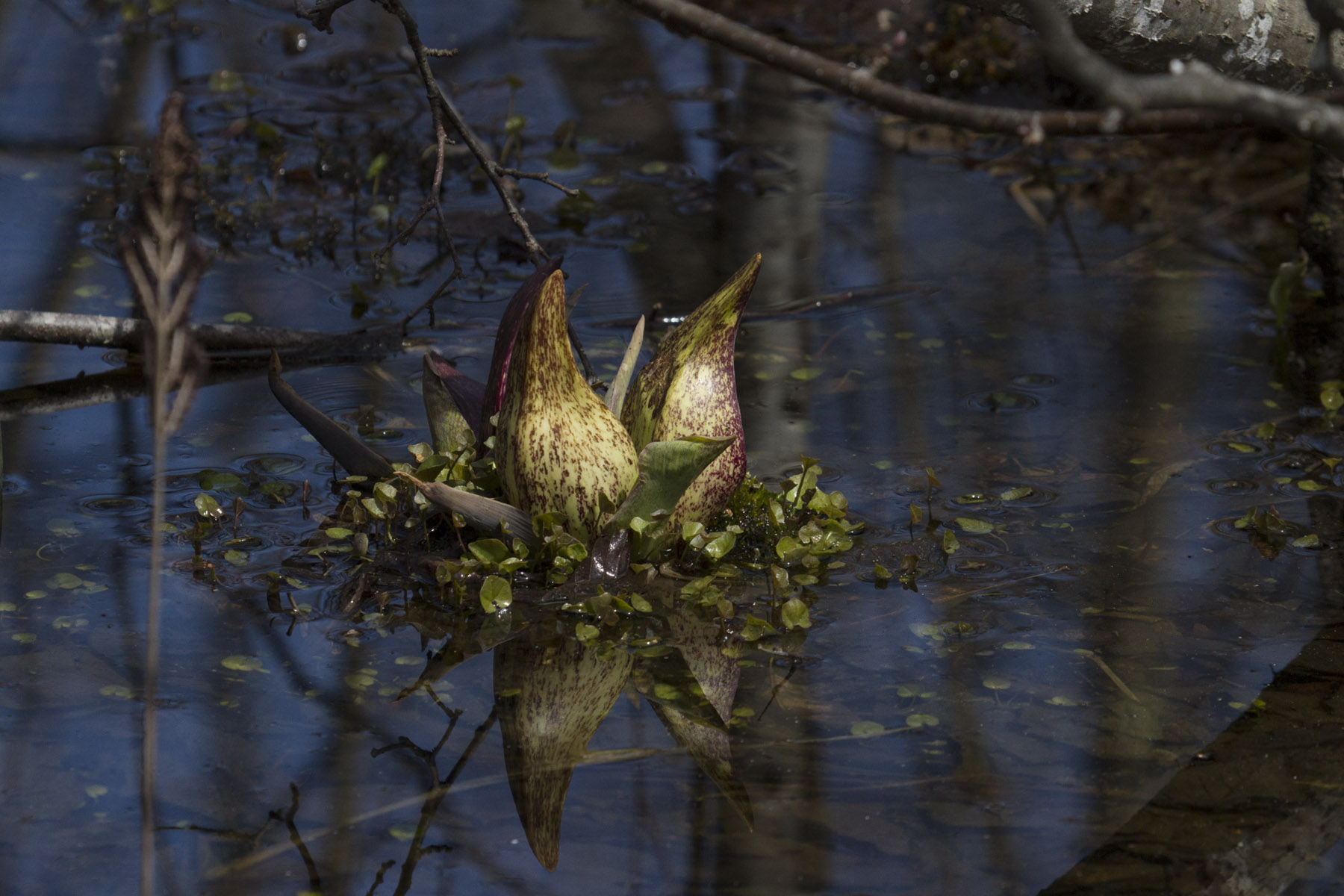 It looks like an alien or possibly something that would have been featured in the “Little Shop of Horrors” movie, but it’s not alien. In fact, it’s quite native and great fodder for the curious mind. Skunk cabbage is on the bloom and lighting up my imagination.

I took a stroll on Yellow Birch trail off of Goodwin Road a few days ago and was overjoyed to see skunk cabbage springing up in ephemeral ponds surrounding the boardwalk. This purple-mottled, funky shaped plant is one of our first native flowering plants of spring. The snow-covered cobwebs in my mind shed immediately to realize that winter is done. Spring is breaking through!

And breaking through is exactly what skunk cabbage does. It’s a thermogenic plant, which means it can melt its way through frozen ground via cellular respiration. (It can actually generate temperatures from 27-63 degrees Fahrenheit above the air temperature.) Even though the ground is still frozen, the flower of the skunk cabbage can be successfully pollinated by insects that emerge at the same time.

The early pollinators: stone flies, scavenging flies and bees are attracted to the foul odor of the plant; hence its name. The skunk-like smell is noticeable when the leaf is broken or torn, or when in bloom. Its pungent scent may also serve to discourage animals from disturbing the plant.

Some animals, such as humans, may have a curiosity that overrides any such odiferous warning. I have one of those animal friends. We’ll call him Mike. When Mike was 17, he was on a mission to eat things that Euell Gibbons was advocating. He read both of his books, “Stalking the Wild Asparagus” and “Stalking the Healthful Herbs.” Mike had tried raw cattail, had made acorn flour, and was ready for skunk cabbage.

According to Mike, he cooked the plant as Gibbons recommended. “It smelled like cabbage while it was cooking, yet extremely stinky.” But the horrible smell didn’t deter Mike from giving it a go. After all, he had already experienced more than 30 of Gibbon’s edibles and needed one more. He tried to consume it, but said it was “awful!” (I think Gibbons said the same thing.) He also related that he had a weird prickly sensation in his mouth. (Skunk cabbage is not considered edible raw.) The horrible smell lasted in his house for two days, which did not make his mother happy, Mike remembers with a nostalgic look.

As we get out there, start exploring, and seeing what nature has to show us, it’s fun to let curiosity spark our minds. Skunk cabbage is an excellent example of that. This weird looking plant, although warning us not to mess with it, begs some of us to test it. This is a test I don’t need to take and prefer not to be graded on, so I’ll just enjoy taking photos of it from the boardwalk.