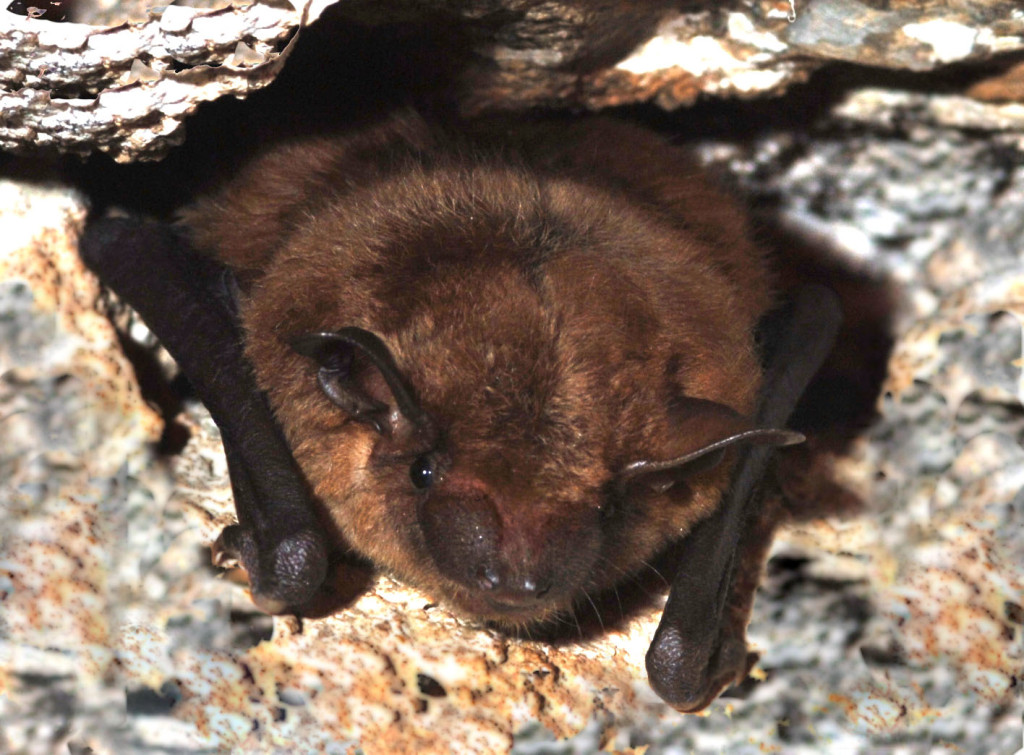 Just like birds, some bat species migrate north in the spring.  Their migration flights take place at night along with songbirds.  Other bat species stay and sleep through the winter but also become active this time of year.  And as with birds, we look forward to seeing them as the warm weather returns.

Bats are fascinating animals that are often misunderstood. They make up 20% of all known mammal species and each year, scientists discover a new one. They are found almost everywhere, except the Arctic and Antarctic regions.

Bats belong to the order Chiroptera, which means “hand wing.” The bones in the wings of bats are actually elongated fingers with a wing membrane stretched between. This makes bats the only mammal that can truly fly. They are nocturnal creatures and most use echolocation to navigate in the darkness. They emit a sound that bounces off objects in their path, sending echoes back to the bat. From these echoes, the bat can figure out the size of an object, how far they are from it, how fast they are traveling and even the texture!

The majority of bats in the United States eat insects such as mosquitoes, beetles and moths. Bats found in other parts of the world eat fruit, which helps spread seeds. Other bats are nectar feeders and are important pollinators in tropical and desert climates. These bats pollinate many fruits humans enjoy. You can thank these bats the next time you eat a banana, avocado or mango! There are even some carnivorous bats that dine on fish, frogs and birds. Of course there are the famous vampire bats. Three species exist in Central or South America. They have a few teeth, which are razor sharp to make a small incision in their prey (usually cattle or horses). The vampire bat laps up about 1 teaspoon of blood and flies off with a full belly. (No, the cow or horse does not turn into a vampire once the sun rises.)

Wisconsin is home to seven species of bats, all of which are insect eaters with voracious appetites. One little brown bat eats 600-1,000 mosquito-sized insects per hour! Each night, they need to eat their body weight in food in order to sustain themselves. To put that in perspective, it would be the equivalent of a 150-pound person eating 600 quarter pound cheese burgers in one day! Bats eat so many pests, it is estimated their value to the Wisconsin agricultural industry is between $658 million and $1.5 billion annually!

The seven species of bats found in Wisconsin are divided into two categories. The Silver-haired, Eastern red and Hoary bats are known as tree bats and migrate south before winter arrives. These bats will soon be arriving back to Wisconsin. The Little brown, Big brown, Eastern pipistrelle and Northern long-eared bats are cave bats. They hibernate in caves and mines over the winter.

Bats face an enormous challenge due to an invasive fungus, which causes white-nose syndrome. The fungus thrives in the cool climate of caves and affects bats as they hibernate. Scientists and citizen scientists are doing a lot of work to survey how many bats there are and where they live. If you know of a bat roost on your property, please consider doing a roost survey. For more information about surveying bats and how you can help, visit http://wiatri.net/Inventory/Bats/ <http://wiatri.net/Inventory/Bats/> .