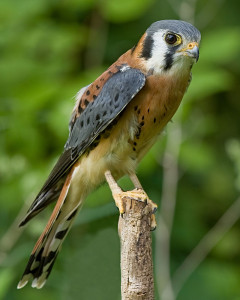 We seem to be in some kind of seasonal purgatory right now, with our mild winter not wanting to give in to spring.  I suspect the movements of migratory birds are being limited, as they often are, by persistent north and north-east winds and frequent precipitation.  A lot of birds have already returned to this area, and others are doggedly trudging northward despite the harsh conditions.  Thousands of ducks are moving as best they can, and ospreys have returned to their nest platforms at Woodland Dunes and Collins Marsh.  Bald eagles are sitting on eggs, and great-horned owls are trying to keep their young warm.

One species whose migration seems to be bottled-up right now is the American kestrel.  On recent drives in the country, more of these birds have been seen than I can remember in recent years.  And that mild winter probably permitted many of them to stay over winter here or not much farther south.

Kestrels are a small, colorful raptor, our smallest falcon species.  They are about the same size and from a distance look like morning doves as they perch on power lines near roads.  Like our other local falcons, the peregrine and merlin, kestrels are energetic fliers with pointed wings.  They have a “moustache” mark on the sides of their head, and are adorned with a combination of dark blue-gray and rusty plumage, with males showing more of the gray than females.  They have round heads, a short, curved beak, and a long tail, and they are often seen hovering over the shoulder of the road as they look for and calculate the correct direction for pounding on their prey- meadow voles, small birds, and in summer, large insects.

These are native birds which over time have adapted to smaller prey than their large raptor cousins, and in recent years have additionally adapted to the changes we humans have made to the land.  Kestrels readily use the power lines we provide as perches from which to hunt the mowed roadsides we maintain, the short grass making small animals more accessible to them.  They nest in tree cavities, but also like old buildings or corners of sheds where they are not too disturbed, or artificial houses we place for them.  They don’t put a lot of effort into nest building, relying more on the protection afforded by the cavity they’re in, and lay four or five eggs which hatch in about a month.  If all goes well, the young leave the nest in another month, and in the south or if prey is abundant, they will raise a second brood.  They like open grassy areas, even near people, with scattered trees for perching.

Their main natural predators are larger hawks, and of course it can be hazardous hunting right next to speeding cars.  If there is a lot of prey, kestrels catch extra food and store it for later use, hiding it from other animals.  And like little superheros, they have a sort of x-ray vision; they can see in ultraviolet the trails left by rodents which urinate as they travel (good manners apparently not a high priority among meadow voles).

One would think that these birds are ideally suited to live near people.  Certainly mice and insects seem abundant around us, and there would seem to be a lot of potential places to nest.  Despite that, the North American Breeding Bird Survey has documented that their population has dropped about 66% in the last 48 years.  Why?  Not as many dead trees are left for them to nest in,  fewer fencerows which add diversity of habitat to open fields, and pesticides which both reduce the number of insects in fields, and affect the health of young birds being fed bugs that have been sprayed.

It is estimated that there are about 4 million kestrels in North America, so despite the decline in their numbers there are still quite a few around for now.  This would seem to be an ideal species to target for conservation:  there is still a viable population, they tolerate the presence of people and our landscape, and many would consider them beneficial to our species because they eat mice and insects.  It would seem that with a little awareness and thought, that we could find ways for people and these wonderful birds to exist together forever,  to the benefit of both.  It’s just a matter of wanting to make it happen.