I can’t help but think of Andy Williams singing, “Its the Most Wonderful Time of the Year,” even though the song was written for the Christmas season.  For the next several weeks, nature will reveal something new every day.  At this moment, (a soft rainy morning), sitting at the window one notices that there was a significant movement of birds over night.  White-throated and white-crowned sparrows are abundant, purple finches are at the feeders, and a broad-winged hawk, probably the one which awakened me this morning with his piercing call, is looking vainly for a thermal to carry him to his nest in the northwoods.  The grass is green again, trees are budding, and wildflowers are blooming.

It’s probably the most distracting time of the year also.  In addition to the vibrant colors and movement of the birds, the songs of many more unseen avian neighbors are also constant.  It’s been a good year for birdsong- the mild winter enticed cardinals, chickadees, and house finches to sing on all but the coldest mornings.  Now, the abundant sparrows, redwings, jays, kinglets, and many others are singing throughout the day.  Like teenagers with smartphones, birds constantly communicate with one another.

Some of the most communicative birds are the wrens  and they have definitely returned en force.  Locally, there are five species seen – one common, three not so common, and one rare but becoming more usual.  All are similar in appearance, but have distinct songs and habitat preferences. 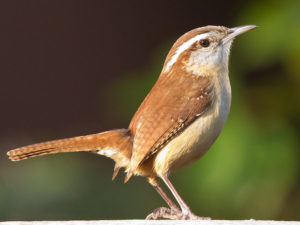 I think most people are familiar with the house wren.  They seem to thrive in places touched by people, especially where we have cleared forests and replaced the trees with shrubs.  They live their lives in the tangles, including invasive plants like the Eurasian honeysuckles, building their messy nests of sticks crammed into closed spaces like the birdhouses we put up for them.  Males start multiple nests, and females choose the best one and finish it before depositing eggs.  The songs of house wrens are almost constant, bubbly, and enthusiastic.  One can find them all around Woodland Dunes in the brush.

Marsh and sedge wrens, two different species, live in open wetlands. Like their names suggest, sedge wrens prefer slightly drier sedge meadow habitat while marsh wrens are found in cattails near open water.  The songs of each are wren-like, but the sedge wren is higher and more electric sounding while the marsh wren is slower and more rattling.  Both of these species are found along Cattail Trail, although you’re more likely to hear them than see them.

Winter wrens also like wetlands, but their world is deep, dark swamps filled with alders and fallen trees.  They like to nest in the exposed root masses of large downed trees, and their nests are very difficult to find.  The birds themselves, small and brown, can be also, but their song rings out like bells in the forest – sung with as much enthusiasm as that of their upland cousins.  Finding winter wrens is a special treat, even for those who have encountered them before.  Look and listen for them along any of the trails that start at the end of Goodwin Road or along the Ice Age Trail.

Lastly we occasionally see a southern visitor, the Carolina wren.  For those who visit the south, the Carolina wren is a common bird and the only wren found in many areas.  Like house wrens, they prefer brushy tangles but they are a larger bird with a slower and louder song.  They are a delightful bird that is being seen in Wisconsin more frequently, probably because our warming climate makes our area more tolerable for them.  Unlike other wrens, they will sometimes take food from feeders and stay the winter.  One never knows where they will show up, but they have been found in many parts of the county, and we expect to see more of this species.

Little brown birds like wrens may not seem important, but they spend their lives eating insects, which often helps people, but more importantly distributes energy and nutrients throughout the natural world.  They are connected to everything else, and as a bonus, add an extra spark of interest to our lives.