Earlier this week, the forest was alive with chattering sixth graders from Mishicot Middle School who were participating in a morning of community service. Nineteen students, one schoolteacher and three Woodland Dunes staff members, armed with loppers, handsaws and muscle power, marched from the Nature Center to the woods along Conifer Trail. The mission was to spend two hours removing invasive honeysuckle that was outcompeting native plants and taking over large areas of the forest.

After a short introduction about how to identify honeysuckle and how to remove this shrub, the students quietly spread out in small groups to begin their work. At first, they seemed shy and many were unsure of their ability to use a handsaw or identify the plant. However, after fifteen or twenty minutes, the groups were confidently snipping, sawing and hauling the branches into large brush piles. They were excited to do this physical, outdoor work and even had fun. One student with a huge grin on his face exclaimed to me, “It’s not everyday I get to use tools like this!”

As an environmental educator, I greatly enjoyed watching the kids interact with the forest. A few students wearing rain boots waded into large puddles of standing water to look for frogs. Their search wasn’t fruitful, but they did pick up some litter that we disposed of. Later, two students inquired about a “spiky purplish plant” sticking up through the wet muck. They were looking at skunk cabbage and thought it was “cool” that this plant gives off a stinky odor to attract pollinators. Even the teacher was making discoveries and investigated the dried seed stalk of the mullein plant. 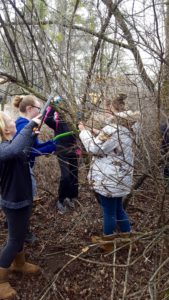 The students worked diligently for the first hour, so we paused for a short cookie break. Before the staff even had a chance to ask them to start working again, they traipsed back down the trail, ready to get back at it! At this point, the students felt confident in their skills and decided it was time to tackle some of the larger honeysuckle bushes. Several students teamed up to slowly chop away at some sizable trunks. Students shouted with delight when they would take one down. Others enjoyed dragging the large braches and launching them into the brush pile. A few sixth graders noted the dark color of the heartwood, which is the dead, center wood of the tree. One girl commented, “It looks like the inside of an avocado!”

This type of meaningful experience is important for kids in the middle childhood years. Children this age desire independence and enjoy pushing their physical limits. They like to learn new skills (like using a handsaw) and applying these skills in a team setting with their peers. The experience of removing invasive honeysuckle in the preserve connected the students to nature, helped them notice it and sparked their curiosity. I definitely think they gained much, even more than the satisfaction of making a difference in their community.