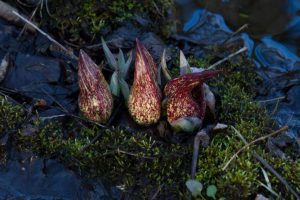 “New” is flowing both northward and upward at a steady pace now. During the cold season, many living things retreated to the safety of the South and the soil, but they’re now rushing back. Wood frogs and peepers have thawed and are migrating to the water to begin their year with an explosion of romance – if they manage to reach the ponds alive. Birds of all sorts are looking for the best locations for their summer homes. In the past week, thousands of tundra swans passed over, golden and now ruby-crowned kinglets hang from the trees, phoebes and winter wrens are singing as new species are showing up every day. As if to welcome them back, plants are sending their stored energy to their stems, swelling the buds, and causing eruptions of flowers on the willows and maples. As I write this, two young eagles are working back and forth over the river, buoyed by strong winds almost playfully. Then, two peregrine falcons, smaller but perhaps meaner, show up harassing and showing the eagles who’s more maneuverable. Suddenly, a pair of sandhills fly by, far above the singing cardinals and song sparrows. One really doesn’t need television on mornings like these, if willing to look up and around.

When the ospreys return, the first thing they do is look over last year’s nest and begin tidying and improving it for this year – just like we do if we’re fortunate enough to have summer homes. They carefully add just the right sticks, pieces of turf or moss, especially attractive pieces of plastic, or found work gloves. (One wonders what they are thinking sometimes.) We, of course, rake our lawns and prune trees and shrubs and make things look good to our eyes. Our nature preserve is bounded on the east by Columbus Street and bisected by Highway 310. We spend some time picking up trash along these roadways. I don’t know that doing so is ecologically significant, but I think that trash lying around gives the impression that people don’t care about the land or their neighborhoods. We’re grateful for the volunteers who give their time to clean things up, and for municipal workers who do the same.

During this year’s snowmelt, one area in particular was really unsightly – the bus stop on the south end of Columbus Street. Somehow, a lot of unsightly stuff had been strewn about between the pavement and the woods – it looked like hundreds of plastic bottles, etc. As I drove by on my way to work, I would make a mental note that we should clean it up. Suddenly, it was all gone. I don’t know who did it, but they picked up every piece, which must have taken some time. Then, one of our volunteers told me that she had met someone who was walking along, picking up trash as he went, just to help keep the area looking nice. He wasn’t looking for credit, just wanted to take some positive action.

Both nature and people need a lot of help right now. Both need to be cared for and treated with kindness. Just like the land restores itself each spring, we need to help restore places where nature is broken – and ourselves, too. Even a little positive action is so much better than criticism or endless debate. We can learn a lot from people like our friend on Columbus Street.