During the late spring, I start to spend more time outdoors around sunset I enjoy this time of day because many animals are heading to bed, yet many are just waking. Part of my job at Woodland Dunes is to monitor an amazing, but very under-appreciated group of animals that begin their day around dusk: bats! 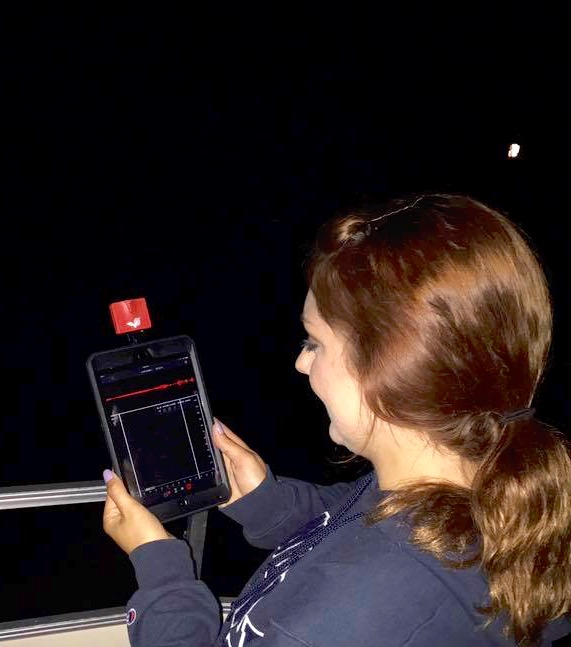 For the last five years, Woodland Dunes has been surveying bats during the late spring, summer and early fall. For the first four years, we used a special piece of equipment called an Anabat monitoring system. This hand-held system detects and records the echolocation calls the bats produce, which are emitted at frequencies most humans cannot hear. Bats use echolocation calls to navigate and locate food. As we survey, we walk continuously for at least one hour on a pre-determined route. The equipment notes the location each bat is encountered and this information and the echolocation sound files are sent to the DNR. The bat ecologists at DNR identify the bat by the sound files and also create a map of the route walked and where bats were detected.

Last year, we were fortunate to receive a Wisconsin Citizen-based Monitoring Partnership Program grant to purchase a different monitoring system to increase our monitoring efforts and further educate the public about bats. The newer system is easier to operate and uses an iPad Mini and an EchoMeter Touch 2, which is a small device that plugs into the port of the iPad. The EchoMeter is able to identify what bat species it detects almost immediately after encountering the bat. This amazing feature has been a valuable education tool.

Many people ask why it is important to monitor bats. They are truly magnificent animals that play an important role in our ecosystem. A single bat can eat up to 1,000 mosquito-sized insects in an hour and a pregnant female can consume her weight in insects each night! It has been estimated that bats save North American farmers over $22 billion every year in pest control services. Additionally, many bat species are in trouble. Overall the populations of cave bats are declining at an alarming rate due to White-nose Syndrome. This fungus grows on the face and wings of hibernating bats, causing them to act strangely during cold months and use up precious fat reserves too quickly. It’s estimated the fungus has killed over 6 million bats in eastern North America and some hibernacula (cave or mine where bats hibernate) have seen a 90-100% mortality rate. Monitoring efforts help scientists track White-nose Syndrome as it spreads and gain further understanding of its impacts on bat populations.

Hopefully by increasing our monitoring efforts, we can learn more about how to help these amazing creatures!