↓
Home Menu ↓
Skip to primary content
Skip to secondary content
I remember 50 years ago being part of a Boy Scout campout at Maribel Caves.  There were a number of activities involved, including planting spruce trees in the field along the road west of the forest, hiking on the trails, and exploring old abandoned cottages down by the river.  Now the cottages are gone, and the spruce trees are tall and full of wildlife. We looked at thousands of wildflowers blooming in the woods, not knowing the names of any of them except for trilliums. Somewhere along the way someone pointed out wild leeks, or ramps, or onions, which we sampled. They had a wonderful onion/garlic odor and flavor, and we enjoyed them to the point that one of the scouts became ill. We felt that now that we knew that one edible plant, we were true outdoorsmen and could survive in the woods forever. On a return visit just a few weeks later, we found that all the leeks were apparently gone, and our survivalist dreams faded as well. 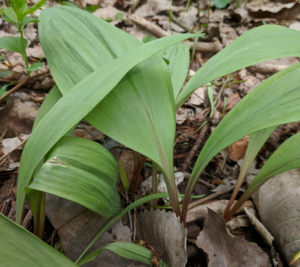 Ramps, wild leeks, spring onions- they are all names for Allium tricoccum.  Onions, both edible and ornamental, garlic, and chives – all are members of the genus Allium.  They all have a distinct flavor, which works well in cooking, as we all know.  Right now, ramps are much desired by foodies, and are a very trendy food item.  They are a native plant to Wisconsin, and grow naturally in forest with rich soils and along streams.  People native to this region have enjoyed them for thousands of years. They are also found in forests to the south of us, especially in the Appalachians. The city of Chicago was named for this plant- shikaakwa, chikaga-wuni shicako,  or chicagou in the language of the Miami-Illinois native people.  In the Ojibwe language they are zhigaagawanzh. In Appalachia, people celebrate the return of ramps in spring- at one time an important vegetable for people who ate few greens during the winter.  It was thought of as a spring tonic to ward off winter ailments.  It is still celebrated in the Smoky Mountains today.
They are a rather small plant, which sends leaves about 6 inches in length to the surface in bunches on the forest floor. They are often in association with birch and sugar maple trees, and other spring wildflowers like wild ginger, bloodroot, mayapple, and trillium. They spread out in first an erect, them collapsed little mound, in some places covering a lot of the ground.  The leaves begin to fade to yellowish in just a week or two, then fade away.  In that time, however, before leaves are on the trees, the leeks gather enough solar energy to sustain their little bulbs for the rest of the year- they must be very efficient solar collectors.  They later produce delicate flowers pollinated by native bees and syrphid flies, and produce shiny, tiny black seeds which fall to the ground.  Beneath the leaves, slender bulbs are formed which also divide vegetatively, slowly enlarging the colony.
They are a sensitive plant, and can easily be over-harvested.  One sees them in restaurants and farmers markets, and although they can be cultivated (it takes several years to produce sustainably useable plants) they are often over-harvested.  In Canada, they are considered a threatened plant, and can’t be served in restaurants.  Both the leaves and upper whitish stems are edible, but one should take care when harvesting not to damage the root bulb.  For the Ojibwe people of this area, it was considered proper to take only one leaf from each plant, so that the population would be sustained forever. Interestingly enough, invasive garlic mustard (Aillaria petiolata), which has a similar odor, is from a completely different family of plants.
In spring, bright-colored wildflowers cry out for our attention, making our walks interesting and inviting. But equally interesting are other plants like ramps, with seldom-noticed flowers and flat, smelly leaves. Like people, their varieties make the world a better place.
photo-  By Nathan Martineau – https://www.inaturalist.org/observations/12337426, CC BY 4.0, https://commons.wikimedia.org/w/index.php?curid=74197776