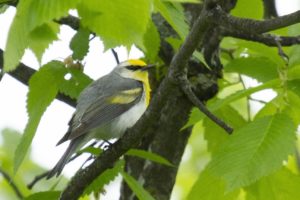 With a few strokes of a master’s paintbrush, a Brewster’s warbler was decorated. It’s a beautiful thing, this little four inch songbird adorned with a golden crown, whitish- yellow throat, and a steely blue-gray back. To compliment these colors, this avian-art is accented with a splash of two yellow stripes on its wings and a black stroke across the eyeline.

I affectionately call this artwork warbler, “Frankenbird.” Why? Because this beautiful bird is a hybrid species of a Blue-winged warbler and a Golden-winged warbler. This past Sunday, this avian hybrid entered my little world.

Woodland Dunes is one of my favorite places to get my birding groove on; however, there are times when one must explore new territories. Heeding this tenet, I migrated a bit south with some of my other birding friends to the northern Kettle Moraine unit. This is a lovely day trip for anyone who seeks birding excitement or solace of the woods.

Fate was with us, and we were lucky enough to find the beautifully painted Brewster’s warbler, a rarity. To be honest, the discovery was pure luck, but not one without work. When birding, your hearing skills become quite important – at least as important as your visual sense, some argue even more so. When you first hear a bird, it puts you in the direction of what you’re looking for. In the case of the Brewster’s warbler, I was hearing a buzzy song but just couldn’t see it nor identify it. I’m pretty familiar with many bird vocalizations, but I also accept the fact that I still have a lot to learn and there are many songs, variations and accents that I don’t know or throw me off.

In reality, none of us could identify the bird, but one guess was a variation of a Blue-winged warbler. Blue-winged and Golden-wingeds have a very buzzy vocalization, very different from the clear, trilly songs of other birds. Once our mystery bird was out in the open, a highly skilled friend in the group identified it as a Brewster’s warbler, very rare, and somebody should get a picture of it. Luckily, I had my camera and snapped a few photos for verification. No wonder we couldn’t figure out its song. It had a mixed vocalization of the two parent species.

After finding the Brewster’s, I did a little more research and discovered that its parents, genetically speaking, Golden-winged and Blue-winged warblers are 99.97 percent alike. That’s darn close in my book.  Some people have worried that the hybridization of the two may be a reason for the decline in the Golden-winged warbler species – caused by man’s activities and habitat changes. However, Cornell researchers conducted DNA genome tests and discovered this is probably not the case. It turns out that these two species have likely been intermixing, at least intermittently, for thousands of years – well before Europeans colonized North America. As a human, that news feels like a bit of relief. Nature happens.

Sophacles said, “Who seeks shall find.” Finding the Brewster’s warbler was an unexpected surprise, but if I wasn’t out there on Sunday, it’s guaranteed I wouldn’t have found it. And the fun part for us locals? The Brewster’s warbler has been seen more than once at Woodland Dunes over the years.

See you out there!