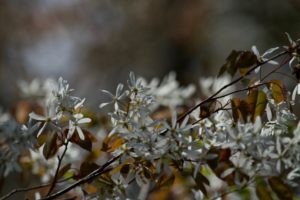 With the onslaught of the emerald ash borer in full force now, we are seeing its effects more and more all around us.  Some areas appear to be devastated, with many dead and dying ash trees failing to leaf out.  This can appear to be a very depressing landscape to view, but we should keep in mind that forest ecosystems are very complicated, and all is not lost.
Woodland Dunes has many areas which are dominated by ash trees- areas which have not yet been discovered by other water-loving tree species.  Ash are aggressive at reproduction, and quickly fill in areas devoid of other trees.  After our area was logged, ash repopulated large areas of wetlands and provided a valuable service to people and the ecosystem.  However, their density and success turns out to hasten their downfall, as this has made it easier for the Asian insect to spread, along with our propensity for moving wood from one place to another.  That some areas are so dominated by one species is a bit artificial- in undisturbed systems many species find homes, and usually no one disease or consumer affects them all.  Older forests are like a reserve of many species which can help to re-populate devastated areas.
In response, people years ago began harvesting ash trees while their wood was of high quality, knowing the trees would not survive.  There is no treatment that can be applied to a forest.  Municipalities rightly are removing trees from parks, knowing they will die, become unsightly, and become a danger to park users.  Fortunately many are quickly replanting, hopefully with native species of trees.  In some cases, trees can be saved by using systemic insecticides, but that requires annual effort and expense.  In my yard I’ve chosen one ash tree planted by my grandfather to try and save, but I will have to treat it forever.  Cities are doing that on a very select basis also, as are other homeowners.
At the same time we need to think ahead.  There is no downside to planting trees.  Just remember that native trees benefit wildlife far more than non-natives.  And we need diversity- after the elms died in a similar way, we probably over-planted ash trees, because they were not known to have many disease problems.  We didn’t anticipate our once again bringing in a problem from overseas, as we did with chestnuts, elms, and others.  Currently hemlocks, beech, and others are experiencing problems caused by introduced pests and diseases- another reason to be more careful in importing any living things from elsewhere.
But in addition to planting replacement trees there are existing helpful trees waiting to grow.  In the swampy areas at Woodland Dunes, speckled alder are already present under the taller ash trees.  As they get more light when ash die off, I would anticipate they will prosper and help shade out some invasive plants like reed-canary grass.  Red maples are present around the edges and in some of the shallower swales, and they will also prosper with more light.  In addition to those, we are planting other water-loving natives such as silver maples, swamp white oak, tamarack, and hackberry.  But perhaps more important than planting, it is important to look for other native seedlings already present on your property and give them a hand.  Chickenwire caging to protect them from deer in the first few years is really important.  At home I have an area with seedling oaks, basswood, and spruce.  The spruce will be fine, but deer chew down the oaks and basswood, which really benefit from caging and grow quickly with protection.
Diversifying our properties with a variety of native tree species will benefit every species in the forest.  In time, predators like woodpeckers, nuthatches, and wasps will consume some of the ash borers, which will run out of ash trees on which to reproduce.  A few ash trees will always survive, but they will never dominate like they have been, and over many years they will learn to resist the ash borers, as they do the more than a dozen native borers in Wisconsin.  Our whole forest ecosystem is being reorganized thanks to our ignorance, but that’s what forests do.  We need to carefully observe, and assist where it’s appropriate, which I think is the best way to honor the forest itself.
photo- serviceberry tree at Woodland Dunes by Nancy Nabak