What a sweet time of year, not only in terms of lilac-scented air but beautiful melodies from dozens of kinds of birds in our yards and at least an occasional warm, soft day. We hope you have time to sit outside and let nature fill your senses.  We have all earned some time to relax and be aware of the world around us.

For those of us who garden or try to garden with native plants, this time of year is the start of the annual pay-off for our work.  Our pay is not enumerated in cash but rather in the subtle beauty of small and often unnoticed plantlife that whose survival, or death, is now revealed as the world greens up around us.  It is particularly satisfying to see plants that were rescued from potential destruction emerge in spring to continue their transplanted legacies.  If they’ve made it through a few tough winters and haven’t been grazed bare by deer, their chances for survival are pretty good.

Like birds and other animals, a lot of native plants need some help to cope with all that we humans throw at them.  Some are very fragile and require a lot of protection, and others are more sturdy and tolerate of disturbance and competition.  When starting to restore an area or establish a native planting, I think it’s good to include some of the tougher natives which can compete better with non-natives and animals that can make life difficult for many.  A few of these tough native plants include the following: 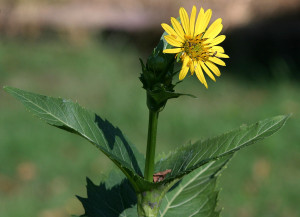 Cup-plant- a tall yellow sunflower native to wet prairies.  These are aggressive and large, so not suited to small flower beds.  They spread by seed but also from their roots, forming colonies.  They are very attractive to pollinators of many sorts- bees, flies, and butterflies, and as their seeds mature they are inspected constantly by finches looking for a meal.  Along with that meal they can also find a drink of water captured in the cup-like place where the leaves wrap around the stems.  Cup-plants are adapted to being grazed by native animals, and readily grow back after being eaten.  Just be careful where you plant them if you don’t want too much wildlife in a given area.

Rosinweed- this is a smaller cousin of the cup-plant, that sports sandpapery rough leaves and yellow sunflower-like blooms.  Again, this native plant is a favorite of pollinators and later on birds, and it will tolerate poor soils while producing a dense, dark green mass of leaves and stems.

Smooth aster and New England aster- these pale to dark purple fall asters are also hardy and tolerate rugged conditions.  Their seeds are not as attractive to birds as some others, but their blooms are used heavily by bees and butterflies. 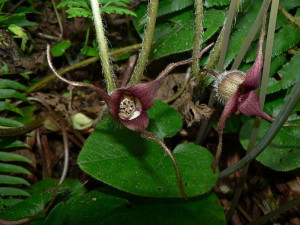 Wild ginger- this woodland wildflower is again native to this area and makes a good groundcover in shady spots.  It has heart-shaped leaves and maroon, bell-shaped flowers that hang underneath.  It spreads quickly and is said to compete with invasive garlic mustard.

Virginia waterleaf- another woodland wildflower that covers the ground with leaves that look as if spotted with water drops and sports pale purple flowers.  This is one wildflower that often survives disturbance and thus begins the natural ecological restoration of such areas.

Pennsylvania sedge- a grass-like plant that only grows six inches or so tall.  Its form is that of clumps of fine grassy leaves that spreads in shady areas and tolerates a wide range of soils.  This would be a good choice for dark areas where an informal grassy area is desired without a need to mow.  It won’t tolerate constant mowing, however.

It’s interesting that so many wildflowers have intimate relationships with insects which pollinate their flowers and disperse their seeds.  Ants are particularly important to woodland wildflowers.  Needless to say if one wants wildflower plantings to flourish, insecticides should be avoided.

These are just a few native plants that do well under cultivation given the right conditions.  Bringing them into our yards not only adds beauty to our personal spaces, but increases ecological value as well.  And the payback this time of year can be priceless.