This time of year the spring migration is coming to an end and many birds are busy nesting.  There are some exceptions, like unmated birds who may be either too young to reproduce or who can’t find a mate, or birds that nest later in the season.  Flocks of pelicans or sandhill cranes seen now might be so-called bachelors who are not burdened with the job of raising young.  Goldfinches and cedar waxwings, however, nest later in summer when fruit is more abundant.  Others, like robins and mourning doves, may already be on the second of up to three or four broods that they will raise this year, which must be exhausting!

One never knows what unusual birds will show up during the nesting season.  Or remain beyond the time they normally move farther north.  So far this month I’ve had a bit of both in my yard. 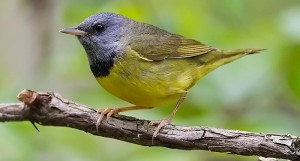 During migration, it is possible to find interesting birds nearly everywhere there’s even a small patch of vegetation.  City parks can harbor many species of warblers at peak times, and those and other migrant birds must investigate every potential habitat patch.  At those times we see or hear new species in our yard almost every day- the little woodlot on our land resonates of songs of warblers and thrushes in mid-May.  This year, one of the most pleasant songs has been that of a mourning warbler- a small, olive-backed tropical migrant with a yellow belly, gray head, and black mark (bib) on its throat.  They prefer wet brushy thickets from which they sing a loud “chirry chorry” song.  Although some nest around here at places like Woodland Dunes, many continue to the north looking for suitable alder thickets.  Like many birds, they stop at suitable patches during migration, arriving in a hungry state after having flown for many miles.  Bird banders, when they have such birds in hand, can look to see the extent of fat deposits below the skin of their throats and chest.  Like our Thanksgiving turkey, songbirds have a keelbone beneath the chest and a small hollow spot just above.  As migrants eat insects they store the energy from them directly as fat, which accumulates beneath the skin in this area.  Newly arrived migrants have metabolized most of this fat, and little is visible.  After a few days, though, they have again built up an accumulation of fatty energy stores, at which point they often continue on another leg of their migration.  The same is true in fall.  Because we don’t usually have mourning warblers nest around our home, I expected the bird to leave after a few days, but for more than two weeks it has been singing away at the edge of the woods by a creek.  I would be very happy if this bird found a mate and was able to nest, allowing us to enjoy his song for a few more weeks. 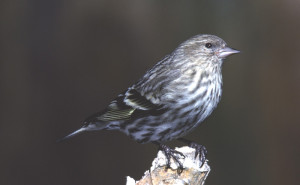 At the same time we still have pine siskins visiting our bird feeders- two females as of late.  These small, dark finches of winter usually show up in fall in flocks and depart when the trees leaf out.  They have a loud, harsh “zeeeeeee” call, and they brighten the winter landscape with their noise and bustling activity.  These two females are dark and pretty quiet, only occasionally calling out.  They cling to the nyger feeder amidst the now-colorful goldfinches almost unnoticed, and we wonder why they are still around.  In other parts of the State they are already nesting, so perhaps these are already raising young, perhaps to then migrate north and nest again.

In both cases, it will be interesting to see how long these birds stay around.  As always, there are many variations to the normal behavior of wild animals, and so very much for us to learn about them.